Teri M. Brown is the author of the new novel Sunflowers Beneath the Snow. She lives in North Carolina.

Q: What inspired you to write Sunflowers Beneath the Snow, and how did you create the family you write about?

A: Sunflowers Beneath the Snow is about three generations of Ukrainian women from 1973 to 2016 - the grandmother Ivanna, the daughter Yevtsye, and the granddaughter Ionna.

Ionna is based on a young lady I know named Ksenia. She came to the United States on a three-month work visa in 2013 and again in 2014 to work at a summer camp and met two of my three daughters.

When it was time to return home at the end of the summer in 2014, Russia invaded the Crimean Peninsula, right where Ksenia’s family lived.

Ksenia was unable to go home because there were no flights. Her visa was extended for three months, and she began working with a lawyer to get asylum status. However, the process was taking too long, and Ksenia was going to be sent to Poland to a refugee camp.

So she disappeared into NYC but continued working with a lawyer. After a few months, she got her asylum and has lived in the US ever since.

She came to visit my youngest daughter in the spring of 2016 and told me an unbelievable story about something that happened to her while in New York. This amazing slice of her life needed to be told.

So I created 80,000 words of fiction just so I could tell that ending.

The last couple of pages in the final chapter (not the epilogue - that is all my fiction again) is true. Ironically, my Kirkus review said there was a lot of improbability in that portion of the tale which happens to be the only part of the tale that is true!

Shortly after hearing this story, we lost touch with Ksenia for a couple of years. Without her, I simply had to make up the why behind her tale.

All the characters are of my own making. Even Ionna, though based on Ksenia, is my own. These characters came to me as if they had been living in my head,

A: When I started, I knew very little about Ukraine. So, I started my research in a very broad manner, finding out about Ukrainian history and how they ended up being part of the Soviet Union. Then I followed through until present day.

Once I had a broad overview, I created a timeline. This was just to help me visualize where my characters were in relation to what I had learned. Then, as I wrote, I did more detailed information based on the particular where and when. 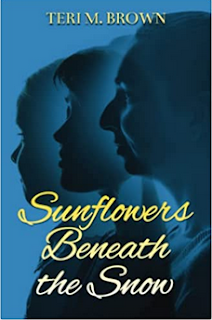 For instance, I have Ivanna standing in a bread line in 1991. My research found that this was a brutally cold winter coupled with a fuel and food shortage. I used that information to make her experiences realistic.

I also had the added benefit of being able to talk with people who lived in a Soviet Bloc country. I got onto chat groups and asked questions to hear of others’ experiences.

Q: Given the situation in Ukraine today, what do you hope readers take away from your book?

A: I have three things I want this book to do.

First, reading Sunflowers Beneath the Snow will help readers get a basic understanding of Ukrainian history (in a non-painful way) which will help them understand the current conflict better.

Second, by growing to know these three women and their families, readers will gain an empathy and understanding for Ukraine and the Ukrainian people. The best antidote to hatred and war is empathy and compassion.

Finally, purchasing Sunflowers Beneath the Snow, in both print and digital format, will help Ukraine because I am donating a portion of my proceeds to a Ukrainian fund recommended by Ksenia - the real-life Ionna.

Q: The Kirkus Review of the novel calls it “A compassionate, balanced, and engaging look at generational conflict—and resolution—during social upheaval.” What do you think of that description?

A: I’m positively in love with the Kirkus Review. I worked very hard to create a book that showed many aspects of Ukraine as well as family dynamics.

If I can create characters that leave readers wanting to know them in real life, then I am satisfied. So, having a Kirkus Review that says I did it is both exciting and humbling.

A: My next novel, An Enemy Like Me, is a historical fiction set during WWII. It follows a German-American soldier, his wife, and his 4-year-old son as the soldier finds himself fighting in Germany. He realizes that the “enemies” are more like him than not.

In this novel, I explore the concepts of xenophobia, intrafamily dynamics, and the recognition that war is not won and lost by nations, but by ordinary men and women and the families who support them.

A: I am very appreciative of book reviewers and readers for helping spread the word about Sunflowers Beneath the Snow. I fully understand that without this help, this novel would get lost in the shuffle.

This realization led me to create a list called “The 10 Historical Fiction You’ve Never Heard of That Will Bring You to Tears.” This list was curated by historical fiction fans and features books that have not won awards but probably should have. You can access this list on my website at www.terimbrown.com.

Finally, I love to hear from those that have read the book. Leaving a review on Amazon is a wonderful way to let me know your thoughts. And please, feel free to drop me a line using the contact page on my website.