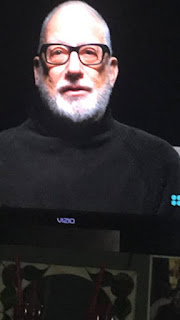 Michael Benson is the author of the new book Gangsters vs. Nazis: How Jewish Mobsters Battled Nazis in Wartime America. His many other books include Betrayal in Blood.

Q: What inspired you to write Gangsters vs. Nazis?

A: The instant that I heard that there had been an organized effort in the US during the Depression to disrupt and deter gatherings of German-Americans celebrating Hitler’s philosophies, I knew it was a compelling story that needed to be told, especially in this day and age when perhaps people have forgotten the horrors of fascism.

The fact that many of the combatants were gangsters was just a bonus!

I had known parts of the story, from my reading of the 26 volumes of Warren Commission testimony, biographies of various mobsters of the era, word of mouth, but I didn’t realize how organized the anti-Nazi movement was in 1938 America among Jewish gangsters (and many of their boxing friends) until my agent Doug Grad alerted me to an article by Robert Rockaway in Tablet magazine which introduced me to Judge Nathan Perlman, the true hero of my book.

He had the idea to put together an army of Jewish gangsters to battle the American Nazis: Jewish because they understood the horrors that were going on in Europe, and gangsters because they needed to break the law to get the job done.

Q: What role do you see these Jewish gangsters playing in the fight against Nazism in the United States during World War II?

A: They were our first line of defense against the Nazis, American heroes. I like to compare them to comic book superheroes.

The 1940 cover of Captain America Comics #1 was Cap’s introduction to the youth of America. It showed him bursting into Adolf Hitler’s inner sanctum, coolly deflecting Nazi bullets from several guards with his star-spangled shield, and planting a devastating right cross onto Hitler’s jaw.

The meaning was clear. The evil Nazis needed gats, and even armed they were no matches for a knuckle sandwich dished out by a red-blooded American boy.

And that was the Jewish gangsters, who from coast to coast busted up German-American Bund meetings with their rabblerousing rhetoric of hate. And the gangsters did it without firing a single shot, indeed without a single fatality. They saw injustice and they socked it on the jaw.

When the war began everyone’s roles changed. The German-American leaders were no longer protected by freedom of speech and were committing sedition. Their followers, many of them, were drafted and sent to fight in the Pacific. The Jewish gangsters were also drafted and fought in Europe.

Nat Arno, one of our heroes, hit the beaches at Normandy on D-Day and marched the hard way to Berlin. He claimed that on a couple of occasions he ran into German POWs marching the other way that he recognized from street fights in Newark, New Jersey! 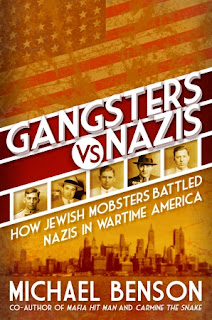 A: The thing that upset me the most were the Nazi Summer Camps for kids. There were German-American Bund youth camps springing up across the country, where youngsters were taught to Seig Heil, love Hitler, and hate the Jews.

The camps promised fresh air and swimming and sports and games, and in many cases the children, and their parents who paid for camp, didn’t know that it was a pro-Hitler camp until the kids got there.

Go inside the Meeting Hall and there would be a huge swastika mounted on the ceiling. On Sundays there would be huge picnics and German-Americans from around the area would come, drink beer, watch a parade, and then hear speeches about the fatherland and its glorious leader.

When possible I interviewed descendants of the participants, but that wasn’t always possible. The story is 80 years old. I got some of it from the Warren Commission (although it would be a spoiler to say why), plus it is discussed in the biographies of Mickey Cohen and Meyer Lansky.

The riots themselves were covered by local journalists who often had no idea who those guys were busting up the Bund meetings. Sometimes the gangsters would wear American Legion caps as disguises.

Q: What do you hope readers take away from the book today, at a time when antisemitism and right-wing extremism is rising?

A: I think it’s strong to call my book a Call to Action, but it is a good sample of how hate speech turns into destructive movements, and if we can draw parallels to today’s America, then great.

The thing that troubles me most about the Aryan Brotherhood and other neo-Nazi groups today is that they act with impunity. We saw them inside the Capitol building, convinced against all reason that they were the good guys.

I’m certainly not advocating violence ever, but it would be nice if some of these haters learned a lesson, that being a Nazi in America can get you slapped around.

A: I am promoting a book of true crime stories called Dark Roses: 13 Horrific True Stories, and I’m writing, with Frank DiMatteo, a biography of Carmine Galante, the Bonanno Family gangster who was for a time the world’s biggest heroin trafficker.

A: Back in 1938 there was no such thing as hate speech laws. As long as you didn’t say anything obscene or shout Fire! in a crowded room, you could say whatever you wanted to, you could call for “the final solution” regarding the “Jewish problem” and it was perfectly legal. Freedom of speech.

Breaking up Nazi rallies with violence, of course, was illegal, so an army was needed that didn’t care that much about the law. It seems hard to imagine now, but in 1938 most Americans were against going to war against Hitler. He had conquered most of Europe and still Mr. and Mrs. America felt they didn’t have a dog in the fight.

Jewish Americans saw it differently. They knew that horrible things were happening in Europe, that their relatives were being rounded up and no one was coming back. So Jewish Americans were the first to realize that war against Hitler was necessary and inevitable, and that the war for the hearts and minds of Americans had already begun.