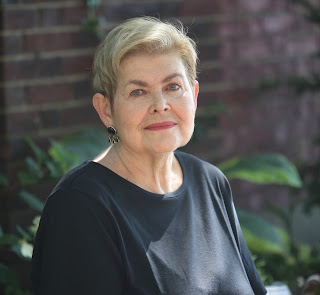 Annette Libeskind Berkovits is the author of the new novel The Corset Maker, which is based on her mother's life. Berkovits's other books include Confessions of an Accidental Zoo Curator.

Q: Why did you decide to write a novel based on your mother's life rather than a work of nonfiction?

A: There are several reasons for this. One is that I have wanted to write a novel for a long time. I had written two nonfiction books, both memoirs, and one poetry book. But I felt that as a writer I needed to flex my creativity muscles.

I undertook the challenge of writing a book of historical fiction because in this genre an author who has experience writing nonfiction has the historical facts to act almost like training wheels.

As is, I had just enough information to inspire me and to use it as a point of departure in a historical novel.

Second, I have long been fascinated with the violence of the WWII period and wondered about what it took to survive a time when 84 million lives were lost. What character traits would it take to survive, especially for a woman?

I felt that such moral issues are best dealt with in a novel. A single strong character, if well drawn, can elicit more understanding in a reader than mere statistics. One cannot get one’s mind around millions, but one memorable character can have powerful impact.

Third, I always see parallels in current society with events that have taken place in the past. History, if it doesn’t exactly repeat itself, carries echoes of the past. And I want to explore what we learn from experience… if anything.

Q: You write that as a child, you knew little of your mother's life story. How did you learn more about it, and what kind of research did you need to do to write the novel?

A: I believe that my mother may always have been an introverted person, but certainly after WWII when she learned of the huge losses in her family: her own mother, four younger sisters and countless aunts, uncles, and cousins, she became deeply depressed.

It wasn’t easy for me as a young girl or teen to get many details of her pre-war and wartime experiences.

After her passing, my father found scattered pages of a book she’d written that she’d discarded because she wasn’t happy with her facility in English.

When our family came to America, both my parents, but especially my mother, strove to learn the language. My mother had often said that one cannot participate fully in the life of one’s country if one doesn’t know the language.

She went to English as a second language evening classes after her job in a fur sweatshop and studied hard, bought all kinds of English-Polish dictionaries, but ultimately was not satisfied with her fluency.

This is why I believe she threw away what would have been priceless material for me.

From those loose pages my father found I learned a bit more.

Later, I met two of her close friends, one of whom was my mother’s teenage partner in her corset shop in pre-WWII Warsaw, Poland. The other was also a friend from Warsaw who as young woman went off to fight as a volunteer with the International Brigades in the Spanish Civil War.

Unfortunately, I didn’t meet the third friend, Raquela, who was also an inspiration for a character in the book. My mother always said that Raquela had saved her life in the Siberian Gulag. I must have seen her in Kyrgyzstan, but sadly I have no memory of her because I was very young.

Between these four women I had enough tantalizing tidbits to form the basis for the novel.

In regard to the rest of the book’s content, I did need to research the historical material, especially the Spanish Civil War battles and the activities of the French Resistance.

But the wonderful women who I have already mentioned were the primary drivers behind the book. The history material is easily available, but ways to connect actual historical events to particular individuals, to put human faces on these events, is rarer and in my view, more effective.

Q: What do you see as the relationship between your mother and your fictional character Rifka, and as a daughter as well as a novelist, was it difficult to separate the two as you wrote?

A: In the first part of the story, Rifka’s actions as a teen are very much my mother’s story. My mother opened her shop at age 17 on one of the most elegant Warsaw streets, something unheard of for a young woman coming from an Orthodox Jewish home, or any home for that matter. 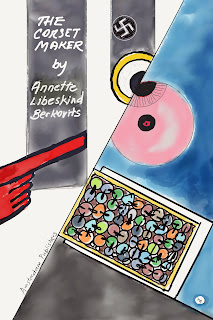 The real flesh-and-blood corset maker behind the fictional one in The Corset Maker is my mother Dora Blaustein Libeskind.

Like Rifka, my mother entered Palestine illegally in the mid 1930s looking for her sister. Palestine had been under the British mandate in the period between 1917 and 1948 and severely restricted Jewish immigration during some periods.

From there on the story is entirely fictional until the reader gets to Spain. That portion of the novel is inspired by my mother’s friend Ruth, who in fact fought valiantly and returned from the Spanish Civil War with a Spaniard whom she later married.

The rest is where my imagination takes over and where I imagine what may have become of my mother if she didn’t end up imprisoned by the Soviets in a Siberian gulag.

Throughout the story, my mother’s courage and bravery inspired me and I lent my mother’s characteristics to my protagonist. That aspect wasn’t so difficult.

What was difficult was trying to keep reminding myself that my mother was a real woman, with flaws, and to caution myself not to place her on such a high pedestal that my protagonist would become unbelievable.

Rifka is courageous but she has flaws. She makes impulsive decisions, especially in her youth. I hope readers will relate to that.

A: I hope, first and foremost, that readers will be fascinated by Rifka’s journey through such a tumultuous time in history and how she navigates the various challenges thrown in her path.

I hope readers will understand Rifka, that they will cry with her and revel in her successes.

I hope readers will see that even in the worst of times, there are good people who can positively impact the trajectory of one’s life.

Most of all, I hope that the book’s epigram will resonate strongly: “above all you shall not be a bystander.”

This is the last line of Professor Yehuda Bauer’s quote which in full reads as follows:

Thou shall not be a victim

Thou shall not be a perpetrator

Thou shall not be a bystander.

A: In the immediate time frame, I am finishing final edits on my coming-of-age memoir which will be released this fall.

Aftermath: Coming of Age on Three Continents shines a light on the impact of the Holocaust on children of survivors. How does growing up in a home burdened by terrible history affect the children’s spirit, motivations, and understanding of the world?

As soon as I send the manuscript to my publisher I’ll resume work on another novel. But, again, I like to challenge myself so I undertook to write a magical realism story.  It is a novel that deals with aging, with dreams, with unfinished business.

It takes place during the pandemic, not because I decided to write it during that terrible period, but because though I began it quite some time before the awful spring of 2020, as the story continued to unfold the pandemic was a fact all around me, so I had to include it. And despite the dire times, magical things did happen in the world.

My working title is The Great Conjunction which refers to a celestial phenomenon, but also to connections within and among families. Well, I am not finished with it, so I won’t say more because my characters may take me in different directions.

A: Yes, I’d like to add something about my historical novel The Corset Maker. I want to call your reader’s attention to the cover. It was designed by Daniel Libeskind, the renowned international architect.

Daniel is my brother and I felt very fortunate he momentarily set aside work on his projects to create the cover. His museums and landmark buildings around the world and the Master Plan for Rebuilding Ground Zero in New York keep him extremely busy so it was such a beautiful brotherly thing to do.

I think he did an amazing job capturing the key elements of the story using abstract images, something that is very difficult.

I am extremely fortunate to have family support in my writing life.

My daughter, Jessica Ursell, frequently does the copy editing and my niece, Rachel Libeskind, an artist in various media, is working on the cover for my upcoming memoir. My son Jeremy has always encouraged me to write a novel. Most of all, my husband David is a fantastic cheerleader and the first reader of all my manuscripts.