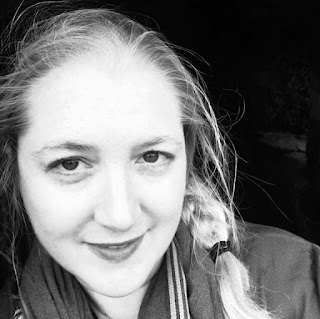 Eliza Knight is the author of the new novel The Mayfair Bookshop, which focuses on the life of writer Nancy Mitford. Knight's many other books include Prisoner of the Queen. She lives in Maryland.

Q: You write that you first read Nancy Mitford’s books in high school. At what point did you decide to write a novel based on her life?

A: Yes! One of my history teachers was a huge fan and assigned The Pursuit of Love to us. It was fabulous! Again, in college while studying for my degree in Family Studies, I came across the Mitford family again when a professor was talking about birth order and sibling dynamics.

I think from that time the idea of a novel about the sisters started to take form in my mind, but it was very daunting. I’d always been a writer, fiction for fun, and a former journalism major.

In early 2020, when I was bingeing period shows/movies on demand, I came across the 2001 version of Love in Cold Climate (based on Nancy Mitford’s novels). This originally aired on PBS the year I graduated college.

The 1980 version was released the year I was born. It was a sign (I say this with a bit of a laugh) that I stop thinking about the Mitfords and start writing. I spent a couple of days writing an outline proposal of a dual timeline novel and sent it to my agent. She loved it! And the rest is history.

Q: How would you describe the relationships between Nancy and her sisters?

A: I think the best way to describe their relationship is: it’s complicated. There are seven Mitford children, and nearly 16 years between Nancy and her youngest sister, Deborah. They were close, loved each other fiercely, but that didn’t mean there wasn’t rivalry that grew vicious. There was always a bit of, “It’s okay if I make fun of my sister, but don’t you dare!”

As a teenager, Nancy would dress up often as a beggar and trick her siblings into thinking she was a stranger. She teased them mercilessly, and they often thought it cruel. She called her youngest three sisters Nit, Sic, and Bor – pulling the letters from their names.

But despite their extreme differences, when one of them needed the other, they would drop everything and run. Unless of course, you were married to a British Fascist leader and friends with Hitler, then it was more like: “I’ll send you a gift in prison.”

I think the siblings had genuine affection for one another, which is sometimes rare in larger families with such an age span, and also in some noble families. I think this stems from having been in such close proximity growing up; they were each other’s closest friends throughout childhood.

They understood each other like no one else could. They had their own language—Boudledidge. If anything, they were able to bond over their parents who were zany in their own right—their father really would chase them in a child hunt, where he’d send them out into the fields and woods, and then set the hounds on them while he “hunted” them on horseback. 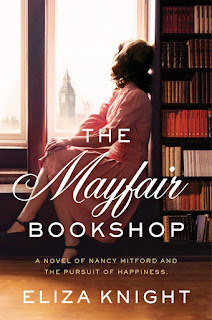 Q: What did you see as the right balance between fiction and history as you worked on the book?

A: That is always a tough one to figure out and varies with each book! For one thing, even though The Mayfair Bookshop is a biographical fiction novel, there has to be truth in it.

One way to balance it was to create the modern-day character Lucy, who had interesting ties to Nancy Mitford, and a mystery of her own that she’d been trying to solve with her mother. This way we can see some of Nancy’s story unfold in a fictional character’s mind.

Additionally, with Nancy, one of my goals was to show a more human side of her. Nancy was a very layered person, and depending on who you were you saw one layer versus another.

When I write novels about real people, I like to dig into the very heart and soul of them, to show the humanness, to bring them to life. Part of doing so was creating a fictional friend—Iris—whom she could be real with.

Most of Nancy’s life itself was incredibly fascinating. She was very much invested in her war work, and her writing, her dogs, and her friends. I did not stray far at all from the true events in her life. Ninety-nine percent of the letters within the novel, I created using Nancy’s voice, as well as the dialogue between friends, etc.

The point of it all is to find a compelling hook, an interesting story line, and let the pieces fall in between. I chose to start at the very first of her publications, and end as soon as she had a successful one, because I think that period of growth was the most challenging for her as a person and character.

Q: What do you see as Nancy Mitford’s legacy today?

A: I can’t pick just one! Many would say her definition of U vs. Non-U, which was a tongue-in-cheek essay she wrote on Upperclass vs. Non-Upperclass language, such as napkin vs serviette, and couch vs. sofa. Others might say it is The Pursuit of Love and Love in a Cold Climate, her bestselling novels, which had been adapted for TV multiple times, including in 2021.

But for me, it is the letters between her and her sisters. When she was working on a project of family ancestral letters, she wrote to her sisters and said they should keep all their letters in case one day people would want to read them. And I am so very glad that she did.

Reading the letters between the sisters shows all of their very human sides. They are endearing, funny, informative, and emotional. The best part of my research was getting to read them all.

A: I just finished writing The Other Astaire, a novel of Adele Astaire (Fred Astaire’s sister) which should release sometime next year. I’ll have a release date soon, I hope.

While I’m waiting for my editor’s notes on that book, I’m in the fun planning stages of a new project! I can’t say what it is just yet, but I am having a thoroughly good time digging into the research. Although by the time this interview airs the announcement may have been made!

A: On my website, on the Book Clubs tab, is a fun PDF guide you can download! Whether you’re in a book club or not, the guide is a fun bonus I created for readers! It has a deleted scene, music playlist, and some fun recipes!