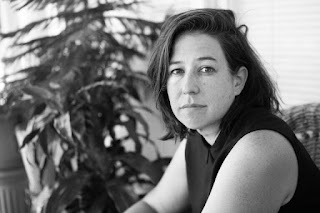 Nell McShane Wulfhart is the author of the new book The Great Stewardess Rebellion: How Women Launched a Workplace Revolution at 30,000 Feet. Her work has appeared in a variety of publications, including The New York Times and Travel + Leisure.

Q: What inspired you to write The Great Stewardess Rebellion, and how did you choose the women to highlight in the book?

A: I’d been tossing around book ideas for years, but this was the one that finally felt like “my” book. I’m passionate about both feminism and the labor movement, and to be able to tell the story of both through a few truly fascinating women was just outrageously fun.

My main “characters” are both leaders of the American Airlines flight attendant union (although they’re enemies for a good part of the book!)—they have very different personalities but they’re both truly “characters” in every sense of the word.

The other woman I included isn’t a flight attendant, but she had a major impact on their story (she was the first woman lawyer in the General Counsel’s office at the Equal Employment Opportunity Commission) and is a fascinating person in her own right.

All three are straight-talking, unapologetic, and extremely ballsy, if that’s a word that’s appropriate to use!

Q: The Publishers Weekly review of the book says, “Throughout, Wulfhart lucidly contextualizes the stewardesses’ campaign within the larger feminist movement, and shares striking anecdotes of the insults they endured and the dedication it took to reform 'the most sexist workplace in America.'” What do you think of that description, and can you say more about how the flight attendants' efforts fit within the feminist movement?

A: I think that description is spot-on. I could have written a great book just about the flight attendant revolution without touching on the larger impact, but it’s absolutely true that their actions had a big effect on the feminist movement—and vice versa!

It was the women’s movement of the 1960s and ‘70s that helped make flight attendants aware of just how sexist their job description was, and just how restrictive their working conditions (having to have painted nails, having to get weighed before they got on the plane, having to wear heels—all things that male flight attendants could cheerfully ignore. And that’s just the small stuff!).

And then they harnessed the power of the feminist movement to take action—they picketed the companies that produced outrageously sexist ads, the ones that portrayed the stewardesses as sexually available and, essentially, as airborne Barbies. 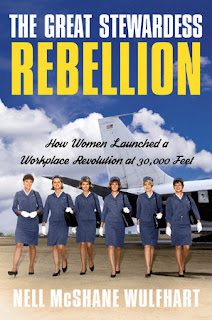 The lawsuits they filed helped improve working conditions for all American women, and opened up jobs to both sexes. And yet their story is hardly known—until now.

A: This book is full of things that surprised me!

One of the most incredible things I discovered is the uniforms that the women had to wear back in the 1960s and ‘70s. Please try to imagine serving hot coffee to a plane full of passengers wearing hotpants and lace-up go-go boots!

I was also thrilled to learn about the sheer daring of these women, especially when standing up for themselves meant facing a room full of men with much, much more power.

Researching the book was a combination of extensive reading and digging through archives, many, many phone interviews, and the best part—going to visit Patt, Tommie, and Sonia in person to talk to them about their experiences.

I took a month to drive from Florida to Texas to Massachusetts to spend time with them and really dig into their stories. It was a delight.

Q: How would you describe the impact of the women you write about on their industry and on working conditions today?

A: The women in my book, and their colleagues, turned working the airline cabin from a job (one that a woman could have only until she married or had kids or turned 32) into a career.

And they changed the conditions of that work along the way: if you see a flight attendant in her 40s (or older), or who’s larger than a size 6, or who wears a wedding ring—you have these women to thank.

And their efforts had ramifications for all working women in the United States. They were some of the first to see the potential of Title VII of the Civil Rights Act to make real change for women in the workplace, and the action they took ended up benefiting all of us.

They made sure that workplaces couldn’t refuse to hire women, lobbied for equal benefits, and launched enough lawsuits and EEOC complaints to establish case law.

A: I’m pondering new book ideas, of course! I also have a side business in which I help people to make decisions—decideandmoveforward.com—which keeps me fairly busy.

A: There are quite a few famous people who were involved in the stewardesses’ adventures, including Gloria Steinem, Jimmy Hoffa, and even Ralph Nader. It’s a fun and surprising read!