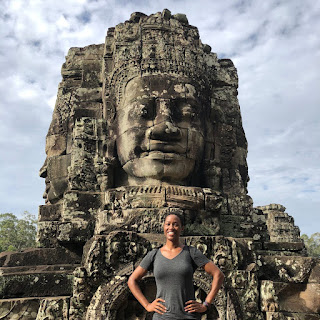 Q: What inspired you to write A Cool Girl's Guide to Courage?

A: When I started my speaking and coaching business, I primarily spoke to youth about the importance of courage to develop into their best selves.

It was a good message, but I quickly learned that young people found the topic to be boring and a bit over their heads. In fact, many of the resources about courage that were in the marketplace made the virtue come across as intimidating and inaccessible.

If I was going to make an impact on them, I would have to find a way to make courage fun to talk about.

I had an idea to give courage a voice. I started thinking about what courage would say to young people if self-doubt and limiting beliefs started to stand in the way of them pursuing their most meaningful goals.

Courage would say (with a side-eye), “how much is fear paying you to sell out on yourself?”

That’s when I decided to write a book of quotes in the voice of courage. This book blends fierce quotes and journal prompts to help girls and young women start thinking and talking about their ability to conjure their own courage.

As a speaker and courage coach, I know how critical it is to be able to call upon courage to take advantage of the opportunities and possibilities that only exist beyond our comfort zones.

Q: What would you say are some of the most important aspects of courage?

A: Three important elements are personal choice, risk and purpose.

Personal choice. Calling up courage is a personal choice. When it comes to courage, nobody gets a cookie or a gold star to do something someone else told them to do. If they did, they’d probably be doing it out of fear of retribution and not from a position of personal choice. 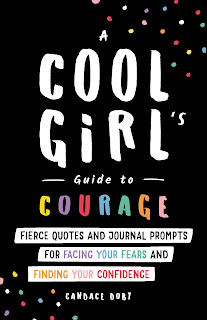 Risk. Risk is actually central to courage. Without it, courage is unnecessary. When we call up courage, it’s because we need to face a challenge, threat or risks that exists.

Worthy purpose. The reason we make a personal choice to face a risk is to pursue a worthy purpose. If we don’t identify a really worthy purpose that we’re after, it becomes really difficult to conjure courage.

Q: Who do you see as the perfect audience for this book, and what do you hope readers take away from it?

A: I think the perfect audience for this book is girls and young women between the ages of 8 and 108 who have things to do.

They want to stand up for themselves, share their talents, explore the world, pursue a new job and take more risks, but they don’t know how to start the conversation on courage or the process of self-evaluation. There are challenges and fears in their way.

These readers need to amplify an empowering and encouraging internal voice so that fear isn’t the only thing they hear.

This book helps them do that in a fun way. It pulls in relatable language, pop culture references, and overall sass to help readers check their limiting beliefs and encourage them to stop sleeping on themselves but rather to pursue their most meaningful goals.

A: I actually did research on popular words and phrases in popular culture.

The voice I wanted to create in the book blended truth, love, and shade. So, I needed to get up on some of the lingo that was being used. But I also wanted to make sure I wasn’t incorporating things into the book were too trendy and wouldn’t be  relatable in 20 years.

I was surprised by how much I didn’t know. There are all kinds of words out there that young people are using that I had no idea about.

A: So much. I’ll be sharing quotes and concepts in the book with audiences across the country in upcoming speaking engagements.

I have a new podcast called The Courage Hotline, where I get to help people who call in or write into the show conjure courage to confront their peskiest personal and professional problems.

And, I’ll be hosting a retreat later this year specifically for young women of color to help them conjure their courage to take up space in professional spaces.

A: A Cool Girl’s Guide To Courage is available at bookstores and online retailers beginning April 5.

I’m on Instagram and LinkedIn as @candacedoby. I would love to hear from people who want to talk courage.