Ella Schwartz is the author of the new children's picture book biography Her Name Was Mary Katharine: The Only Woman Whose Name Is on the Declaration of Independence. Her other books include Stolen Science. She lives on Long Island, New York.

Q: How did you learn about Mary Katharine Goddard?

A: The first time I heard about Mary Katharine Goddard was a small mention in a random news article about the Declaration of Independence, right around the July 4th holiday.

Her name was mentioned almost as an afterthought which was very strange. Here was a woman whose name appears on one of our nation’s most treasured documents, and she was just an afterthought! I didn’t think that was right. I knew I had to tell her story.

Q: What do you think Dow Phumiruk's illustrations add to the book?

A: Dow’s illustrations are magical. Did you know there isn't single known picture of Mary Katharine in existence? Dow had to imagine what a colonial woman of Mary Katharine’s standing would look like. 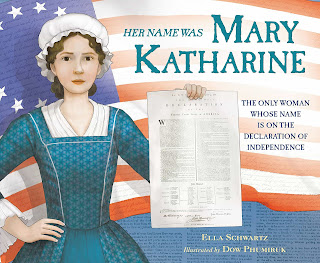 The details she captured are simply amazing. She even gave Mary Katharine’s fingers ink stains because of course a printer would have stained fingers! Dow’s illustrations really brought the story to life.

Q: The Publishers Weekly review says, "Schwartz’s straightforward narration positions the Connecticut-born woman as hardworking and loyal—the steady hand that keeps her fickle brother’s printing and newspaper ventures afloat..." How would you describe the relationship between Mary Katharine and her brother William?

A: Their relationship was…complicated. Mary Katharine was incredibly loyal to her brother, even when he didn’t deserve it.

I do believe William cared and respected his sister, but I think his ego eventually got the best of him. Their relationship never recovered from the strain.

Q: What do you see as Mary Katharine's legacy today?

A: Obviously, the Declaration of Independence is her most lasting legacy, but I also think Mary Katharine’s legacy is an example of strong women who defy societal norms. She is an inspiration.

A: I am finishing revisions on my next book, Is It Okay to Pee in the Ocean?, which comes out in January from Bloomsbury. I’m also working on a new middle grade fiction project while researching a middle grade nonfiction book about a lesser known story from the  Civil War. More news to come!

A: Here’s a cool fact that I didn’t know while researching this book: there is a Mary Katharine Goddard chapter of the Daughters of the American Revolution. Since the publication of this book, I have been in touch with the chapter and they’ve been so supportive.

They are currently working to install a plaque at Mary Katharine’s grave in Maryland. I’m so moved by this initiative. Mary Katharine deserves to be honored, remembered, and celebrated!