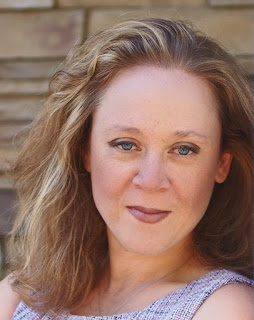 Ella Schwartz is the author of Stolen Science: Thirteen Untold Stories of Scientists and Inventors Almost Written out of History, a new middle grade book for kids. Her other books include Can You Crack the Code?. She lives on Long Island, New York.

A: Picture a scientist in your head. Chances are, that scientist is white, male, and often dead. As a woman with a background in science and engineering, I very rarely got to see someone who looked like me represented in the sciences.

Sure, we learned about Marie Curie in school, but she was often taught to be the exception. A woman who defied all odds to rise to science greatness. Didn’t history have more to offer than just one Marie Curie?

I feel deeply that children today need to see diversity represented in the sciences. Young girls, children of color, and immigrants need more than just an exception to inspire them to pursue the sciences.

I set out to write Stolen Science with that goal in mind. I wanted children to see themselves in important scientists.

When I began researching the book I wasn’t sure what I’d find. I knew there was probably plenty of scientists who had performed brilliant work that never got the credit they deserved, but I never expected just how many stories I’d uncover!

Choosing the scientists to feature in the book wasn’t easy. I wish I was able include them all, but that would have made for a very thick book!

I hated having to choose, but what drove my decision was not only an interesting and inspiring story, but ensuring diverse representation and a wide array of science topics featured. I probably have enough material for a second volume! 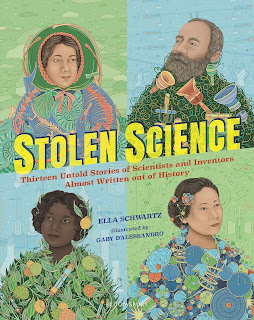 Q: You begin the book with Mary Anning. Why did you choose her as the first person to profile?

A: I loved Mary Anning’s story. She grew up poor, uneducated, barely knowing how to read and yet by the age of 12 she had discovered the first fossils of a then-unknown dinosaur called the ichthyosaur. Paleontologists and fossil scholars of the time could hardly believe it was true. But they were proven wrong by a 12-year-old!

Mary Anning was the perfect story to open Stolen Science. The target reader is about the same age as Mary was when she made her discovery. Hopefully she will inspire some budding paleontologists to start digging in their own backyards!

Q: What were some of the most surprising things you learned while researching the book?

A: It shouldn’t have surprised me, but it did. History can be very selective. Some of the stories we all grew up learning are just plain wrong, or have been twisted and reshaped.

For example, we all grew up learning Alexander Graham Bell invented the telephone. That’s not quite true. Bell just got lucky and stole the credit from a poor Italian immigrant named Antonio Meucci.

In fact, Congress passed a resolution in 2002 recognizing Meucci as the true inventor of the telephone. Are we going to fix all the textbooks? Sadly, no.

Q: Can you say more about what you hope kids take away from these scientists and inventors?

A: I have a new book coming out in January called Her Name Was Mary Katharine from Little Brown Books for Young Readers. It is the story of the only woman whose name appears on the Declaration of Independence.

I’m also working on final revisions to Is It Okay to Pee in the Ocean?, which is out next year from Bloomsbury. Spoiler: It’s really okay to pee in the ocean. You won’t break the universe. And I have a few other projects I’m dabbling with that I’m not quite ready to share yet!

A: If the pandemic and Zoom school has taught us anything it’s how important personal connections are for our kids.

I’m proud this year to be a part of #KidsNeedMentors, a wonderful program that pairs authors with classrooms across the country for an author-in-residence experience. I am so excited to be working with a 4th grade class this year in Rensselaer, NY. I can’t wait to see what these kids will create.