Charles Dellheim is the author of the new book Belonging and Betrayal: How Jews Made the Art World Modern. His other books include The Face of the Past. He is a professor of history at Boston University.

Q: You write, "Insofar as it is possible, the purpose of this book is to restore and recreate the life, work, and milieu of certain Jews who became arbiters of taste." Can you say more about that?

A: My aim was to create a vivid and compelling portrait of the rise and fall of certain Jewish outsiders who, against the odds, came to play a pivotal role in making the art world modern. This proved to be a tall order because the narrative stretches from the later-19th century to the present and spans Europe and the United States.

As a historian, however, I am bound by the limitations of the sources that I mine. Try as I might, there are certain things that I’d dearly love to know about my characters’ feelings and thoughts, that I simply can’t find out.

A: As my teacher Asa Briggs told me, for historians “everything is grist for the mill.” But you never know how much dross you have to go through along the way.

I worked at 14 archives on both sides of the Atlantic, where I explored diaries, letters, reports, and business records that helped me understand the lives and works of the protagonists, their fortunes and misfortunes. And I spent hour upon pleasurable hour poring over the paintings that they dealt and collected. Finally, I made a point of visiting the principal places that I wrote about.

All of the research was directed to a single aim: Telling a rich, nuanced story that did justice to the remarkable people I wrote about and the works of art that they loved and lost. 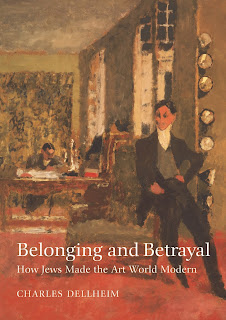 Q: Of the various art dealers and collectors you write about, are there one or two that especially intrigued you?

A: One of the many characters I found most captivating was German-Jewish art dealer and collector Alfred Flechtheim. Warm, enthusiastic, and gregarious, rarely seen without a cigar, he always seemed to be on the verge of bursting at the seams.

The scion of a family of good bourgeois merchants, he was proud to follow in their footsteps and devoted himself to carrying on their principles and activities.

As it turned out, though, he fell in love with modern art, which he began collecting in earnest after a trip to Paris where he met Picasso, who admired his fluent Spanish. He also met a fellow German Jew, Daniel-Henry Kahnweiler, who had opened his own Paris gallery and embraced the Cubists.

Shortly after Flechtheim was able to extricate himself from the family business, the outbreak of the First World War upended his plans and, indeed, just about everything else.

With a little help from his friends, including Germany’s leading modernist champion, Paul Cassirer, he came roaring back after the war, opening galleries in major German cities and taking an interest in a major gallery in Vienna. But economic turmoil compelled him to take a step—a number of steps actually—back.

But the greatest threat came with the rise of the Nazis who turned Flechtheim into a symbol of perfidy, a Jewish champion of modern art, which they presented as a threat to German “racial purity.”

Q: In the book, you write, "The story of Nazi-stolen art may not be a story without an end, but its end is not yet in sight." What do you see looking ahead when it comes to restitution?

A: By now, I would have thought that the concern with the fate of Nazi stolen art, which has been in full swing for more than two decades, would fade.

But this has not happened. New cases and new controversies keep coming to the fore. And they involve leading institutions, including the Metropolitan Museum of Art and the Museum of Fine Arts.

How long will this keep going on? Luckily, I’m a historian and have no more knowledge about what the future will bring than anyone else does.

A: That’s top secret(ish), but I can say that it’s the story of a famous family of Jewish refugees.

A: Yes, I wrote this book for the general reader and I hope that anyone interested in Jews or art will enjoy it.