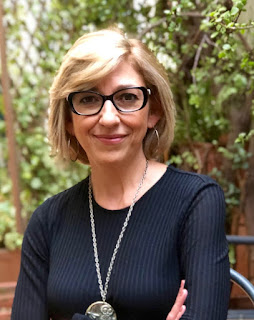 Christina Dalcher is the author of the new novel Femlandia. Her other books include the novel Vox, and her work has appeared in a variety of publications. She lives in Norfolk, Virginia.

Q: You note that an inspiration for Femlandia was Charlotte Perkins Gilman's 1915 book Herland. What intrigued you about Gilman's book, and how did you create the world of Femlandia?

A: Herland was undoubtedly part of the inspiration. One thing I enjoy doing as a writer is taking a known premise (in this case, an all-female intentional community that is very much painted as a utopia) and turning that premise on its head.

I asked myself what might happen if the women of Femlandia weren’t altogether peace-loving, and if the men who stumbled into their world weren’t welcome. I also enjoy (maybe enjoy isn’t the right word) pushing a concept to an extreme that is almost, but not quite, believable.

My first novel, Vox, explored what might happen if a powerful faction decided to resurrect the Culture of Domesticity and relegate women to the family/household sphere.

In Femlandia, I look at an extreme manifestation of misandry in the form of a commune founded to safeguard damaged women but which turns out to be far from utopian.

As for building the world inside Femlandia’s gates, I researched various intentional communities, both past and present, to create a cult-like atmosphere.

For ideas on how to turn the outside world into a total economic catastrophe, I asked a good friend with a background in economics and investment banking. He provided excellent insight into the ticking time bomb of pension funds, and I took it from there. 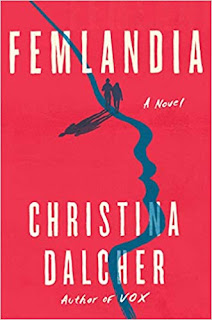 Q: The Publishers Weekly review of the book says, "Exploring speculative responses and remedies to toxic masculinity, objectification, and systemic patriarchal oppression, this wildly provocative glimpse into the future is sure to spark lively discussions about humankind’s past, present, and future." What do you think of that description?

A: Many of the characters in Femlandia believe the world would be a better place if only it weren’t for all those horrid men, so I think this review speaks to the point, and I’m thrilled that PW calls my book “wildly provocative.”

I also think we could replace “toxic masculinity” and “systemic patriarchal oppression” with different phrases.

The resulting review would adequately describe my other books—both those published and those still in progress, whether they deal with “feminist” issues or something else.

As I said, I love to speculate on what might happen when any movement goes a step too far, which, according to Bertrand Russell, all movements do!

Q: How would you characterize the mother-daughter relationships in the novel?

A: Complicated, but not necessarily unfathomable. Every one of us is the product of two other people, and we often wonder whether nature or nurture (i.e., heritable traits or the environment) plays a more significant role in shaping our character.

As parents, do we expect our children to share our values? And, as children, do we struggle with breaking free of the mold?

Femlandia looks into maternal disappointment and disillusionment from the perspective of two different women, Win and Miranda, with Miranda in the role of both mother and daughter. I hope it leads to interesting conversations among readers.

A: I always sketch out my plots in advance, but I leave a lot to chance—characters are organic, and I don’t like to shoehorn them too much. I knew something like the current ending would be on the table, but I honestly didn’t know how it would play out.

A: Plenty! I have two completed manuscripts.

One asks how we can remedy an unremediable error, specifically with respect to wrongful execution. The other looks into what happens to a family when laws restricting free speech suddenly apply in that most intimate of settings—the home.

And I’ve got a fun, character-driven idea about our dependence on social media. In short, it’s dystopia all the way!

A: I don’t have a dog of my own anymore, but I never leave home without a pocketful of dog treats!