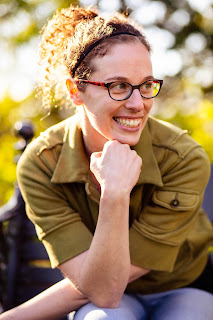 Elissa Brent Weissman is the author of The Renegade Reporters, a new middle grade novel for kids. Her other books include The Length of a String. She lived in Baltimore for many years and now lives in Christchurch, New Zealand.

Q: What inspired you to write The Renegade Reporters?

A: While visiting schools as an author, I discovered that in lots of elementary schools nowadays, the students deliver the morning announcements via a television show.

Some record on an iPad in a quiet room. Others have professional-quality studios and equipment. No matter the setup, the kids do everything themselves: the writing, reporting, filming, editing, and more.

I got to be a guest on a few of these broadcasts and watch the impressive young journalists in action. That’s what gave me the idea to write about kids who work on their school news show.

That was my intention, anyway. Once I started writing, I surprised myself in Chapter One, when I found my main character, Ash, and her friends quitting the school news crew and deciding to film their own show, The Underground News, in Ash’s basement.

Q: What do you think the novel says about internet privacy, especially for kids?

A: Ash and her friends uncover troubling information about how their personal data is being handled by Van Ness Media, the company that makes their school’s educational software (and sponsors their school news show!).

Van Ness Media is fictional, but in researching this book, I learned the degree to which real companies are using our personal data in all sorts of creepy ways.

I hope the novel makes readers aware of what’s going on and gets them thinking or talking about it. There are huge benefits to using the internet, of course, but is it ethical for companies to be tracking, storing, and selling our personal details?

It’d be great if The Renegade Reporters encourages kids to consider the nature of privacy in general, online and off.

Q: The Publishers Weekly review of the book says, "Weissman develops the rivalry and lunchroom shenanigans well against a Baltimore backdrop with recognizable local details." How important is setting to you in your writing? 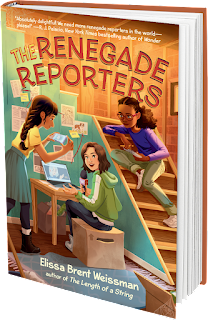 A: It’s funny, because geographic setting is usually one of the least important elements in my writing. (I’d typically work hard make sure a school setting feels fully developed, for instance, but that school could be almost anywhere in America.)

But the geographic setting plays a huge role in The Renegade Reporters—I’d almost say Baltimore is a character in the story—and it was so much fun to write!

The book is firmly grounded in Federal Hill, the South Baltimore neighborhood where I lived for most of my adult life, especially because it’s such a quirky, vibrant, diverse community.

Like many Baltimoreans, the characters live in row houses, take the water taxi, go to local parks, and attend Baltimore-based events like Rosh Hashanah Under the Stars. I’ve heard from young people who’d never read a book set in their hometown before and loved all the recognizable places and details.

I hope The Renegade Reporters offers a positive portrayal of a city that many people associate only with its problems.

A: All I knew was that I wanted my investigative journalists to uncover something scandalous involving the company that sponsors their school news show.

It took me a lot of trial and error—and conversations with my writers’ group, agent, and editor—to figure out what that scandalous thing should be.

Once I had that figured out, the drafting went pretty quickly and smoothly, though I did make changes as I went and, of course, some significant changes in subsequent drafts.

That said, there’s a small subplot in the story involving a running joke with The Underground News team. Even though I had no idea where the main story would go, I knew from the very beginning how that joke would come into play at the end. (I know I’m being mysterious here, but I think the surprise is worth it!)

A: I was working on a YA novel for over a year, but I wasn’t happy with how it was going, so I’ve put that aside for the time being and am now in the very early stages of a new middle grade. I won’t reveal any more details at the moment, because it’s still percolating, and I’m not sure where (or if) it will go.

But I’m thrilled to announce that my debut picture book will come out in Fall 2023 from Abrams. It’s called Hanukkah Upside Down and is about a pair of cousins, one in New York and one in New Zealand, who compete to see if Hanukkah is more fun in the winter or summer.

It will be illustrated by the talented Omer Hoffmann, and I can’t wait to see the whole process unfold.

A: Well, since you asked…there are two things I’d like you to know.

Try the “Which Renegade Reporter are you quiz?” to see which of the characters is the best fit for your personality!

If you share something about The Renegade Reporters on your social media OR post a review of the book on Amazon and/or Goodreads, I’ll send you a deleted chapter that didn’t make the final version.

I’ve got two deleted chapters to share: one I truly love but had to cut due to space, and another that I find quite funny but had to sacrifice because it didn’t really move the story forward.

Email a link or screenshot of your post/review to elissa@ebweissman.com and I’ll send you the deleted chapter of your choice. If you post on social AND write a review, I’ll send you both!