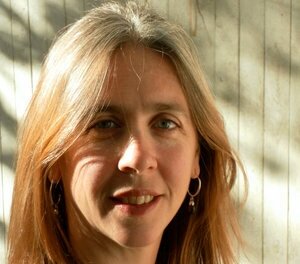 Lenora Todaro is the author of the new children's picture book Sea Lions in the Parking Lot: Animals on the Move in a Time of Pandemic. Her work has appeared in a variety of publications, including The New York Times, The Atlantic, and The Village Voice. She lives in Brooklyn.

Q: What inspired you to write about animals' reactions to the Covid-19 pandemic?

A: During lockdown last spring, hunkered down in a two-bedroom apartment in Brooklyn with my husband, three teenage sons, and our dog, I found myself transfixed by reports of unusual animal behavior occurring around the world—behavior brought about by the COVID-19 pandemic and the abrupt stoppage of human activity as one country after another urged its citizens to stay indoors.

An octopus swimming into a canal in Venice, Italy, caused a local stir. A kangaroo’s journey hopping through the empty city streets of Adelaide, Australia, was captured on a police video. Sea turtles hatched in record numbers in Brazil and Mexico, marching their little bodies triumphantly into the ocean.

I began to see these stories as a series of vignettes for a children’s picture book that would tell vivid stories, rooted in science and reporting, about animal behavior and habitats during this unusual time.

I had been writing Sidewalk Naturalist, a column about urban wildlife in New York City, so this idea was a natural segue and my editor liked the idea of looking at the pandemic through the lens of wildlife.

Q: How did you decide on the animals to include in the book, and how did you research their behavior?

A: I’m trained as a journalist, and I work well on deadline, but this is my first children’s book, so the process was a new adventure.

I researched and fact-checked stories that showed up online. I read papers about the “anthropause.” I interviewed scientists and conservation biologists. I reached out to teachers and librarians to find out how a book like this might better help them in the classroom. 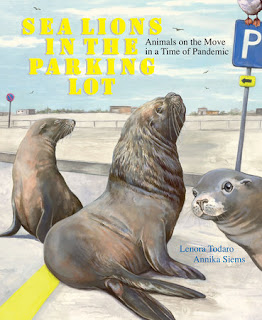 I wrote and revised 20 or so animal vignettes, then whittled them down to 12 that represent a variety of countries, habitats, and creatures, and arranged them so that the book, for the most part, follows the pattern of a day-in-the-life, moving from Australia through Asia, Europe, Africa, and the Americas.

Q: What do you think Annika Siems' illustrations add to the book?

A: Annika Siems is an award-winning artist trained in science and book illustration. She has a deep love for nature, and an impeccable eye for detail. Her art for this book tells a visual story of the people-empty beaches and roads and cities that animals explored during lockdown.

She also injects humor into her art, so her painting of the sea lions shows them eyeing a fish sign outside a shuttered shop, or we see her big-eyed spring peepers migrate across a clothesline where the now ubiquitous blue mask hangs.

Her art reflects the seriousness of the issue of habitat loss, but also some hopefulness.

Q: What do you hope kids take away from Sea Lions in the Parking Lot?

A: During lockdown the outdoors offered people respite and a chance to reconnect with nature, whether in a city park or on a mountain trail.

Imagining wildlife unbounded and unobstructed by human activity and industry gives people hope. Look how nature bounces back when people get out of the way.

So now we ask: what can we do to coexist with our wildlife brethren? How can we tread more lightly, live more modestly?

I hope children connect with the animals' stories and feel empathy, but also inspired. Maybe they'll consider volunteering with their families to help count birds during migration season, or protect turtle eggs on the beach during breeding season, or tag horseshoe crabs during a full moon in the late spring.

Mostly, I hope they enjoy the stories and want to read more about wildlife.

A: I’m at work on several other children’s book projects, one of which is with my editor now and that I hope will be out in Spring of 2023.

I also began a graduate program in Animal Behavior and Conservation, and I recently became certified to dive so I hope my future explorations take me into the big blue.

A: Readers may notice that each vignette includes a group name for the creatures, so a “mob” of kangaroos, or a “flamboyance” of flamingos. I include back matter that expands on details about the habitats described.

On my website (www.lenoratodaro.com) I have a downloadable discussion guide for educators and some further resources for learning about animal behavior and habitats.