Hermione Hoby is the author of the new novel Virtue. She also has written the novel Neon in Daylight, and her work has appeared in a variety of publications, including The Guardian and The New Yorker. She grew up in London, and now lives in Boulder, Colorado.

Q: What inspired you to write Virtue, and how did you create your character Luca?

A: It began with character, specifically that welcome psychosis of a voice in my head one night while I was in Maine for a week with friends in the summer of 2017. This was Luca, and he had a lot to say, and I felt there was some kind of spark or momentum in the voice, so I just kept listening to him.

Q: In the New York Times review of the book, Jabeen Akhtar writes, "When we engage in social activism, are we less virtuous if we signal it? What is our motive for engaging in the first place? 'Virtue' considers such questions, but is too smart a novel to answer them." What do you think of that description?

A: If I had answers I would write polemical essays rather than works of fiction! I’m grateful for such a description.

A: I had no idea how it would end. I don’t think I could write a novel if I felt sure of the ending.

I suppose I’m writing to find out who these characters are, eager for them to surprise me with where they’re going and what’s revealed. So, I took a great many wrong turns and detours before I found my way to an ending that felt honest and satisfactory. 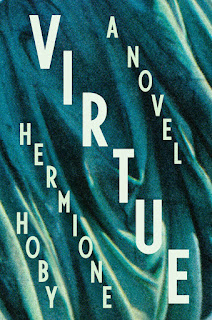 I’m by no means an expert plotter, which I feel a bit ashamed about, but I take solace in thinking of Heraclitus (!) saying that character is destiny, or, to put it another way, character is plot.

Q: In the Times Literary Supplement, Heather Cass White calls the book "the latest in a line running through The Ambassadors and The Great Gatsby, The Talented Mr Ripley and The Line of Beauty. Its closest kin of all is Claire Messud’s The Woman Upstairs..." Do you agree with those comparisons?

A: I’m experiencing an illicit sort of pleasure reading this because I made a rule for myself that I wouldn’t read reviews. So, I hadn’t seen this and it’s lovely to hear! All these comparisons are very flattering.

Gatsby was very much in my mind – that sense, to borrow a phrase of my partner’s, of “spoiled glamor” that pervades Fitzgerald.

More prosaically (literally) I reread it when I was doing my final edit of the manuscript. I don’t often read in such an instrumental way, but I wanted to see how filleted and fleet a novel could be, and how Fitzgerald pulled this off. I duly went and cut about 15,000 words. It felt great.

And yes, I recently rewatched the Minghella version and was like, oh damn, this kid is so Luca. The naivete, that sense of being held hostage to a sexual fascination with a couple.

And I’m particularly thrilled that this critic mentioned Claire Messud: I read that novel a long time ago but loved it and it affected me deeply.

A: This book seriously depleted me, or maybe it was the brutal and relentless tyranny of the previous administration plus the ensuing global pandemic that depleted me, as it has all of us!

In any case, I’ve started what I hope will turn into a third novel (it seems absurd to declare a messy, private Word doc such a thing) but I’m cheating on it with some frequency as I work on short stories and bits of journalism. These, naturally, are way less daunting than a novel.

I also find it easier to gauge whether a short story is successful than a novel. A novel is a long, slow, doubt-riddled process and in one sense, it’s never worth it.

As in, however delightful and miraculous and privileged it feels to receive emails from strangers about the book, I can’t really imagine what would make the psychic toll feel “worth it.” That sounds stupidly melodramatic and self-pitying, forgive me!

The thing is, as soon as a novel is published it’s a document of your past, you’re a different writer by that point, there’s an urge to disown the thing. I suppose that’s just how it has to be.

A: Maybe I can just seize this opportunity to shout out some excellent recently published books I’ve read!

Barrett Swanson’s essay collection, Lost in Summerland, is dazzling. I was awed by its intelligence and heart and felt bereft when I finished. It reminded me that a good essay can be as artful and magical as the best short story.

I loved Anne Serre’s The Beginners, a gem of a novella published by the enduringly wonderful New Directions.

I have the great pleasure of some friends’ new/forthcoming books sitting beside my bed, calling to me: Sheila Heti’s Pure Colour, Amia Srinivasan’s The Right to Sex, Chloe Cooper Jones’ Easy Beauty.