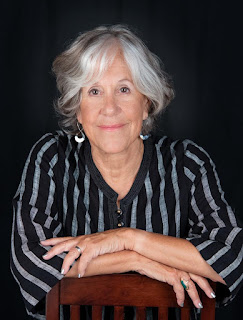 Kathryn Lasky is the author of Faceless, a new middle grade novel for kids. Her many other books include the new children's picture book She Caught the Light. She lives in Cambridge, Massachusetts.

Q: What inspired you to write Faceless, and how did you create your character Alice and her family?

A: I have always been fascinated by WWII. My uncle was in the Battle of the Bulge and another relative of mine served under Patton in North Africa. And I had an aunt who was a WAVE, which was the women’s branch of the U.S. Naval Reserve.

As a kid I devoured WWII novels. Still do. Reading one right now called The Last Bookshop in London that is set during the Blitz. So I suppose that is how I came to write WWII novels.

Faceless is my fourth! My first was Ashes, then came The Extra, and then Night Witches.

Faceless departs from some of  the other  books because it has a slightly fantastical element. I was also always interested in spies. So I wanted to have this fourth book focus on spies and spy craft. The notion of a  young person as a spy really intrigued me.

Q: How did you research this particular novel?

A: Well, I had already done a lot of research for my previous books, but for this one I had to learn a lot about spy work and spy craft (I love that term). I had planned to go to the Spy Museum in D.C., but alas with the pandemic I couldn’t. 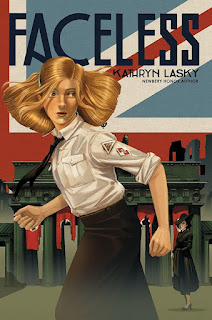 I was particularly interested in the Russian advance on Berlin and then their continued advance toward the Elbe River in 1945.

Also, the book takes you into the innermost sanctums of Hitler—everything from his bunker in Berlin to his retreat, the Berghof in the Bavarian alps.

I got to know  the ins and outs of his private life—what foods he ate (he was vegetarian), the people who worked closest to him. A secretary of his died not all that long ago—defending him to the end, or at least claiming that she know nothing what was going on.

His fascination with Wagner’s opera The Ring Cycle, his relationship with Wagner’s daughter-in-law. His mistress Eva Braun—all that. Although The Ring Cycle is a very small part of the actual book, I spent a lot of time listening to parts of it and reading about it.

Q: You also have a new picture book out this year, She Caught the Light. How did you first learn about astronomer Williamina Stevens Fleming, and what do you see as her legacy today?

A: I live in Cambridge Massachusetts, about a 15-minute walk to the Harvard observatory, so I suppose that is where I first heard about Williamina Stevens Fleming and what they called the women calculator or the human computer, which was a dozen or so women who devised a scheme for reading and organizing  the spectra of stars and thus mapped the heavens. 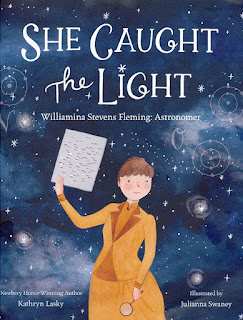 Williamina  was in my neck of the woods a kind of local hero. Well, they all were, but she was the first one and then others came to join her. It was too hard to write  about all of them, at least in one book.

I also liked that all the odds were against her. She arrived from Scotland in Boston with her husband who promptly abandoned her as soon as they landed and she was pregnant!

She began as a housekeeper in the home of the director of the observatory and he and his wife early on realized how smart she was. Stories like this just almost write themselves. There is a natural narrative arc that they come with. So I loved writing her story.

A: Julianna’s illustrations are beyond fabulous. I tried to convert the images of very abstract concept through language using a lot of metaphor but she took those metaphors and made them bloom like flowers across the page in her illustrations.

A: I am working on a few things but it’s too early to discuss them right now.