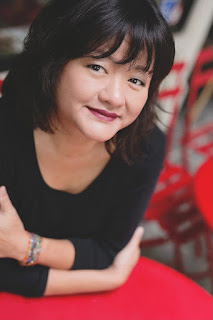 Q: Why did you decide to write about Teddy Roosevelt in your new picture book?

A: I already had another two books, Elizabeth and the idea for [another in the series about] Julius [Caesar], with all the gross stuff Romans eat and how the child Julius doesn’t want to eat a lot of it but is convinced to eat his peas. For our kids, it’s gross; for Julius, it was the most unprovocative thing on the table!

I was discussing the series with my editor. I did a contract for three books, not two. A series seems like it should be at least three. So I needed an idea for the third book.

My husband said, You should write about Teddy Roosevelt—Go to Bed, Ted. It’s dedicated to Louis—this is your book!

By coincidence, I was doing some writing for the National Parks. I was aware of the whole legacy of how it came from Roosevelt. I decided I already had Get Up, and that Go to Bed would be the second.

Q: How would you compare Teddy Roosevelt to Queen Elizabeth I and Julius Caesar? 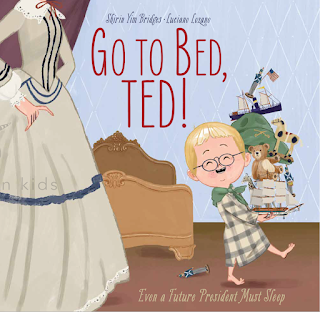 A: I don’t think I ever tried to! The point of the series is to bring them all back to kids. I focused on what children find difficult, and looked at how much more difficult it was back then. I just tried to find the common child in them.

Go To Bed, Ted! is also about self-created difficulties because he was such a hyper child. Ted is so hyper that of the three kids, his personality comes out the most—the incredible energy he had all his life.

Researching the different eras, I was probably more familiar with Elizabethan England and late Republic-early Empire Rome than with Teddy Roosevelt. I was not born here. Ironically, this was the most foreign book to me, but I really did love it.

You do all this research, and just use a small amount. I watched a series about presidents on The American Experience, which was really fun.

Q: Can you say more about how you researched Roosevelt’s life and how you chose the details to incorporate into the book?

A: I do a lot of reading. I start online to give me an overall sketch. The Theodore Roosevelt Foundation’s website. Biographies, books, media.

As I gather information, I start a list of interesting factoids. At the end, I have a long list of 25-30 things I could use. Then I come back to the 32-page format and decide which would lend themselves to more fun facts for kids. The Teddy Bear was one I had to put in. The Rough Riders was an obvious inclusion.

The thing that was a little difficult is that so much of what Roosevelt did, we don’t approve of now. He saved lands, but shot [many] animals on a single hunting trip. I discussed how to handle this with my publisher.

Q: What do you think Luciano Lozano’s illustrations add to the story?

A: Luciano brings a sense of humor. I really like the way Elizabeth was illustrated, with very beautiful illustrations. This one was more amusing. There’s so much expression in Teddy’s face. It’s so relatable—he always looks like a little boy.

Q: Will you do more books in this series after Julius Caesar?

A: That might be it for the series. I’m writing an adult novel right now, which is also historical fiction. I’m hoping to have it on submission within a month.

My novel is also imagined as a series of three to four interwoven tales. Two are drafted and I’m finishing one. They’re set against history, but are personal stories.

A: We are in such a strange moment right now. Politically, everything is heightened. Teddy Roosevelt has gone from being a beloved president to a controversial president.

I hope adults’ politics don’t get in the way of children’s enjoyment of a lens that lets them see what life was like in the past. It’s not restricted to this one individual—it’s about wearing pantaloons and having wooden teddy bears. That’s universal in its appeal to children.

I’m hoping the universality will overcome the qualms about who we talk about and don’t talk about at this moment.