Lauren Tarshis is the author of I Survived: The Galveston Hurricane, 1900, the 21st book in her I Survived middle grade series for kids. She is also the senior vice president and editor-in-chief/publisher of Scholastic Classroom Magazines. She lives in Connecticut.

Q: Why did you choose the Galveston Hurricane of 1900 as the topic of your new I Survived book?

A: I am fortunate that I have so many readers who give me great input. I had written about the Galveston Hurricane in Storyworks, one of our amazing Scholastic Magazines. This was a narrative nonfiction article, about a real boy named Harry Maxson, who survived the hurricane and also helped rescue many people.

Many Storyworks readers wrote to me asking for an I Survived book on the topic. This required a lots of further research and a visit to Galveston, to bring the city to life and create my fictional character Charlie. But as always, I'm so happy I listened to my readers!

Q: You write, "The Galveston Hurricane showed what happens when we try to ignore the power of nature." What impact did the hurricane have, and could people have done a better job of preventing some of the tragic damage?

A: The Galveston Hurricane changed the history of Texas. Before that storm, Galveston was in a race with Houston to become the second largest city (at the time San Antonio was #1).

Houston was ahead, but Galveston was about to overtake Houston both in population and in importance -- Galveston's port was one of the biggest in the South.

But the storm changed all that. Galveston was rebuilt and made safer with a sea wall and a massive engineering project that raised a large part of the city up above sea level. But it never recovered its stature.

Today, Houston is on track to become the third largest city in all of America. And Galveston has a population of around 60,000 — the size of many towns.

You ask a difficult question about whether people could have done a better job of preventing some of the damage. There was so little understanding of weather science in 1900. 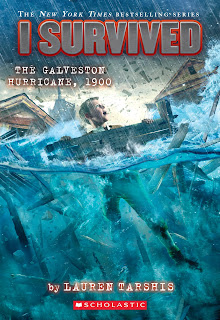 There was strong evidence of Galveston's vulnerability to the storm — the area had been inundated by a storm in the 1830s. And a neighboring city — Indianola — had been obliterated by two hurricanes that happened just a few decades before. But the science of weather prediction was still in its infancy.

Plus, as the Galveston historian Casey Green pointed out to me, communication was a huge challenge at the time. How would the city leaders have spread the word about the storm? Many people were immigrants who didn't speak English. So even printing warnings in the newspapers wouldn't have been enough.

It's easy for us to look back and feel more could have been done. But it's hard to fully appreciate the dynamics at the time that would have posed challenges to even the most vigilant leaders.

Q: What do you see as the right blend between your fictional characters, like Charlie in this book, and the historical events you're describing?

A: That's a great question, and one I'm always grappling with. I need to create a very rich and engaging back story to grip my readers and connect them to the event.

There is always a fictional plot that is occurring within the framework of the historical time period — something my readers can relate to, like the search for a mummy in the first class baggage hold of the Titanic, or rumors of a spy on board the Hindenburg.

But I can't make this TOO big. It has to fit within the historical sequence. It's kind of like building a ship inside a bottle. Every book is slightly different depending on the timetable of the event, and I'm constantly adjusting as I work through the many drafts.

A: This book was a different kind of research experience because of COVID-19, and limits on travel. I had a big Texas trip planned for March 2020, but that was canceled. And yet my deadline remained the same. And so I had to conduct most of my research using books, interviews, and online resources.

I was fortunate enough to visit Galveston in the summer of 2021, before the book was published. It was powerful, to see the city in person after learning so much about it.

The most surprising fact for me about Galveston was what an important city it was. There were more millionaires living there than in almost any other city in the world.

A: The team is working on two new I Survived graphic novels — The Attack of the Grizzlies, which is coming out this spring, and Hurricane Katrina, which is in the early stages of creation. I'm providing some support to the amazing team creating these adaptations. But mainly I get to just marvel at the work they do.

Meanwhile, I'm full throttle on I Survived 22, about the Great Wellington Avalanche, 1910. This was a train disaster that happened in Washington, in the Cascade Mountains.

I have written a few books set in this time period, and it's endlessly interesting — all the changes happening, women gaining a greater voice, people’s (somewhat unfounded) faith in technology and science.

A: I never imagined, when I first came up with the idea of the series, that I would still be writing it more than 10 years later. And that I would feel more inspired and engaged than ever, thanks to the deep connection I feel with educators and kids (and people like you!).

For me, this is more than a writing experience. I feel so lucky to be part of a shared mission of helping kids connect with the world of reading and learn how history shapes their lives today.