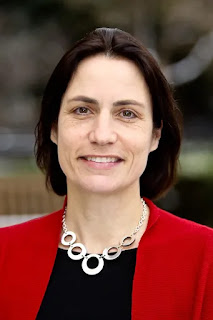 Fiona Hill is the author of the new memoir There Is Nothing for You Here: Finding Opportunity in the 21st Century. Her other books include Mr. Putin: Operative in the Kremlin. She is a senior fellow at the Brookings Institution, served on the National Security Council from 2017-2019, and testified in Donald Trump's first impeachment trial. She lives in the Washington, D.C., area.

Q: Why did you decide to write this memoir, and how did you choose the book's title?

A: I decided to write the book in the wake of the testimony I ended up giving in the first impeachment trial.

I made the decision to put myself into my opening statement because of the line of questioning I got behind the scenes by Republicans who were trying to discredit me and others—that we were deep-state coup-plotting.

In my public testimony, I felt I had to explain myself and who I was. I had to lay things out there. I wasn’t what they were trying to portray me to be. I got hundreds of letters saying I should tell more of my story.

I came out deeply worried about American democracy, and felt I had to do something to explain how we got here. The best way to do it was maybe I should write a book laying out what I started to say in my testimony.

If not for those conditions, I wouldn’t have written it the way it turned out. Originally I was going to compare the U.S., the UK, and Russia. But in the end, I couldn’t go back to the UK, and I was using Russia as a cautionary tale. I looked at how the U.S. got to two impeachments and the storming of the Capitol on January 6.

There was constant reframing. The book became evolutionary. There was so much happening.

The title was what my father said when I was leaving high school. He said, if you get an education and a good job, there’s nothing for you here. It was a wrenching thing. My dad was a great dad. The idea was profoundly sad that I’d leave my parents behind.

Also the title fits with the current moment. A lot of people feel America is not giving them what they want politically or economically--though for me, this was the land of opportunity. That feeling of being left out then leads to bad things politically. 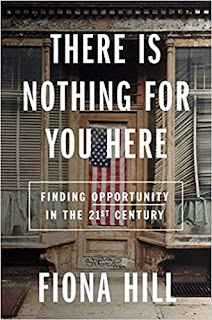 Q: Speaking of opportunity, the book's subtitle focuses on that idea, and you say toward the end of the book, “Far too many people who were born into similar circumstances in the generations after me did not have the same opportunities” you had. Do you think that can be changed?

A: It will change. There’s a lot of legislation on Capitol Hill that would address that. There are things in the back of the book that I lay out—we can change things, too. It’s not just the big public policy interventions.

It isn’t ideological, either. I’m not suggesting revolution or big-government solutions. Government is going to have to do a lot but also communities and individuals need to band together to get things done. We need the political will.

Q: In the book, you write that "Trump would come more to resemble Putin in political practice and predilection than he resembled any of his recent American presidential predecessors. Sometimes even I was startled by how glaringly obvious the similarities were." Can you say more about this, and about what you see looking ahead for U.S. democracy?

A: I don’t want to create an equivalency between the U.S. and Russia, but with the presidency, you see Putin as one man standing above everyone else, and Trump admired strongmen, where no one else mattered.

The Constitution begins with “we the people,” and we need to put “we the people” back. We can’t be held hostage to two political parties, red and blue. There’s a discussion in the book about how to get people to see they need to engage, to use self-agency so there are no forgotten people. Put the “we” back in, not the “me.”

Q: Do you think Trump will run again?

A: I do, unless he tells us otherwise. He wants to be the center of attention. Maybe I’ll be proven wrong. If Trump runs, democracy will be [lost]—he’s running on the basis of a lie. If he wins the popular vote, that’s a different matter.

It becomes a kind of minority rule, with revenge and divisiveness.

Q: What impact did testifying in the impeachment trial have on you?

A: It’s put me in a spotlight that I would never have anticipated. It’s created a platform I could never have envisaged. I was just going there to do my duty, participate in democracy, and tell the truth.

It’s astounding to me that I would become a celebrity for telling the truth. Everybody should tell the truth. I keep quoting George Orwell, that in a time of universal deceit, telling the truth is a revolutionary act. That’s not what I thought I was doing when I set foot in the building.

The book is a message: Hey, look, this is where we are now, how we got there, and we all have to do something. You can stand up. Give everybody else a hand up. We’re all in this together.

Q: Will you be working on another book?

A: I only just finished this one at the end of May. I’m trying to get the message out, to speak out. I’m hoping to figure out the next steps of how I can engage with others to take some action.

A: I was the exception. I had plenty of challenges, but the bigger story is of the help I had on the way. If people realize that, it’s not just pulling yourself up by your own bootstraps—you need the boots and the straps. Nobody does everything completely on their own. For the most part, we are products of our society and environment.

If we could scale all that up, it might take the edge off some of the political polarization.