Alex Perry is the author of Pighearted, a new middle grade novel for kids. A former middle school teacher, she lives in Arkansas.

Q: You've said the inspiration for Pighearted came from a story on NPR about CRISPR technology. Can you say more about that?

A: In January of 2017, just after my family moved to Arkansas, I was listening to NPR and driving around our new town. I heard a story about a scientist that wanted to use CRISPR technology to grow human organs in pigs.

Actually, since the creatures would have some human DNA, they wouldn’t technically be classified as pigs any more. They’d be called chimeras.

As I understand it, the scientist wanted to remove a part of a pig’s DNA and replace it with human stem cells. The result would look like a pig with a human heart or liver. The hope was that there could be a pig farm where they could harvest organs for transplantation instead of bacon.

The concept is controversial. What if the process didn’t do exactly what it was supposed to? It’s called “gene editing,” but it isn’t quite as exact as it sounds. The NPR story mentioned that the pigs could possibly grow some human neurons.

Then I started to think about what it would be like to be a human/pig chimera with a human mind. What if it was aware of its fate? The idea reminded me of a high-tech Charlotte’s Web, and I turned that concept into Pighearted.

Q: How did you create your characters Jeremiah and J6?

A: J6, the human/pig chimera, was easy. What would it be like to be a pig in a human’s world?

I knew I’d want to make him very confident and a complete diva because that’s hilarious (or maybe I’d watched too many Muppet movies as a kid). He knows he’s unique and sees himself as much tougher, smarter, and more beautiful than the humans around him. 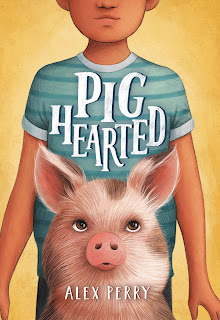 But his most essential characteristic is his heart. He’s driven by his humanity. His love and compassion define him more than his curly tail. The people, on the other hand, just see him as livestock. There’s something both fascinating and deeply unsetting about that kind of character.

It was more difficult to get inside Jeremiah’s head, so I took inspiration from my own childhood.

Jeremiah dreams of becoming a professional soccer player and loves being out on the field, but after he has a heart attack all of that is taken away from him. Getting a new heart is his only chance at getting his life back.

When I was 10, I was diagnosed with juvenile rheumatoid arthritis and went from racing other kids at recess to walking around school with a rolling backpack, cane, and elevator key. I felt some of what Jeremiah feels and that helped me connect with him and see the world through his eyes.

Jeremiah also feels guilty about how he impacts those around him and wants to personally solve every problem his family faces. He puts entirely too much on himself, and I remember feeling a lot of that as a kid too.

A: I spoke to a cardiologist and heart patients that used the kind of heart pump Jeremiah uses, an LVAD. I also did a lot of reading about everything from the anatomy of the heart to the types of pigs used in clinical experimentation.

The most surprising thing I learned was how far technology had come in terms of artificial heart pumps and monitors.

In early drafts, I made up a heart monitor that would keep tabs on Jeremiah’s condition. As I learned more, I discovered that the actual device in use today, the implantable cardioverter-defibrillator, serves the story much better than anything I could make up.

A: I hope it engages their critical thinking and gets them to consider a tough question that doesn’t have a single answer. This book doesn’t have a villain. It’s just people trying to do the right thing and do as little harm as possible. I think that’s most of us most of the time.

I also hope that it inspires kids to become curious about science and medicine and maybe look into careers that could one day help save lives.

Finally, the heart of the book is a story about siblings that love each other and act with empathy and selflessness. The world needs more of that.

A: I’m drafting a story about two girls trying to find their missing sisters and finding friendship in each other.