Judy Bloomberg is the author of the new book Always a Traveler, Never a Tourist: In Search of People and Places on the Road Less Traveled. She lives in Massachusetts.

Q: What inspired you to create this book, and how would you describe the difference between a traveler and a tourist?

A: I have been an intrepid traveler for over 50 years, and have taken thousands of photos. I have shared them with friends over the years and they have always loved them and asked for more.

It was during COVID, when we were all stuck at home (and unable to travel) that I finally had time to sort through all of those photos, select what I considered the best and most interesting ones, and compile them into a book.

To me, a tourist is someone who follows the crowd, visits what the tour guide says to visit, and checks destinations off their “to do” list. They may be able to say that they’ve seen the Eiffel Tower or the Taj Mahal, but they don’t really know much about the people or culture of the places they visit.

A traveler is always interested in learning new things about their destinations and the people who live there. They interact more with locals than with other tourists, and they love to veer off the beaten path. They love serendipity.

For me, some of my most memorable experiences were things that were unexpected, such as the time when I randomly encountered the Queen Mother of Bhutan (mother of the current king) in a Bhutanese temple and had a lovely 10-minute conversation with her (in English), or when I found myself the guest of honor among 300 Kazakh people at a wedding in western Mongolia.

Q: How did you choose the photographs to include in the book?

A: I love photographing people. To me, they are far more interesting than buildings, landscapes, or even animals (although I do take photos of those things as well).

In addition, I have something of a love affair with indigenous people in little-known parts of the world. I particularly like photos of people in traditional dress, which is becoming rarer these days, even in developing countries. People who dress much in the way their ancestors did tend to make some of the most colorful and joyous pictures, and I wanted to share that color with others.

I also wanted to expose readers to images of people that they most likely would never meet in person, to broaden their understanding and appreciation of other cultures. 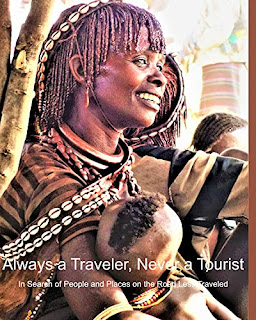 Since I have visited about 115 countries, I tried to include photos from many different parts of the world, from Papua New Guinea to Ethiopia, Mongolia, Bhutan, Myanmar, Peru, Laos, India, and many more.

Q: Of the various places you've traveled to, do you have a few favorites?

A: I actually have a few categories of favorites.

For a place that I love to return to again and again, I would choose France. My husband and I lived there for a year, in 2002-2003, after a fateful lunch in the French village at Epcot, during which I casually said “France is so beautiful and quaint. It would be wonderful to live there.”

He was supposed to say, “That’s crazy! We have jobs and responsibilities here in the U.S.” Instead, he said “Why not? Let’s do it!” and then, suddenly, there we were at the start of an adventure.

For places that opened my eyes as to the amazing diversity of peoples in the world and the beauty of traditional cultures, I would choose Papua New Guinea, Ethiopia, western Mongolia, northern Thailand, Laos, rural Viet Nam, Bhutan, Lake Titicaca, and any place where I can attend a colorful local festival. I loved Antarctica for its immensity, remoteness, and beauty, as well as the hundreds of thousands of penguins we got to see there.

And finally, I loved my visits to Italy, Spain, Holland, Australia, New Zealand, and Japan. I have welcomed the opportunity to revisit any of those places again when circumstances permit.

A: I hope to open people’s eyes to the wondrousness of our world and the diversity of the people who inhabit it.

I could have filled a book with photos of the Eiffel Tower and the Leaning Tower of Pisa, but people would not have learned much from that. Instead I chose photographs of people and places that readers were relatively unlikely to encounter, even if they had visited many places in the world.

I want people to develop an appreciation of how people are different, but also how we are the same (We all send our children to school, enjoy festivals and celebrations, shop, cook, eat ice cream, and talk on our cell phones, to name just a few things).

Finally, I want people to realize that it’s OK to get out of your comfort zone. That’s where the most memorable experiences happen.

A: I am not currently working on a writing project, but I have given some thought to writing a memoir about my year in a very small village in France. There would be lots of entertaining and amusing anecdotes to include in that one!

A: I live in Massachusetts with Mark, my husband of 51 years and partner in virtually all of these adventures. I always say that I am the “start-up guy” and he is the COO.

I am the one who comes up with the idea of these amazing places to visit, but he is the one who keeps our explorations from going off track. He never forgets the international electric converters or the imodium tablets, and he has a way better sense of direction than I do.

Without him, I would still have traveled, but I might never have had some of the amazing adventures that appear in this book.