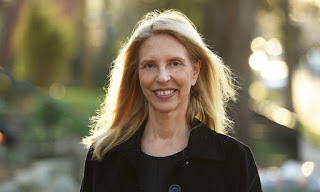 Nadine Epstein is the author of the new book RBG's Brave & Brilliant Women: 33 Jewish Women to Inspire Everyone. She collaborated on the book with the late Supreme Court justice Ruth Bader Ginsburg. Epstein's other work includes the book Elie Wiesel: An Extraordinary Life and Legacy. She is the editor in chief and CEO of Moment Magazine.

Q: How did you and Ruth Bader Ginsburg end up working together on this book?

A: Justice Ginsburg was a devoted reader and supporter of Moment, and I interviewed her a number of times over the years and we became friends.

In 2019, we gave her Moment’s first Human Rights Award in New York City. So that she wouldn’t have to take the time to write a speech, we flew up Nina Totenberg up to interview her.

Nevertheless Justice Ginsburg showed up with a speech in hand about Henrietta Szold, Emma Lazarus, Anne Frank, all of whom had inspired her. She gave it and it inspired everyone in the room.

That night we also gave her the “Tzedek Collar,” which we had commissioned for her. She loved it and announced she would wear for it for the first day of the 2019 Supreme Court term, and asked me to bring it to her in her chambers.

When I did, she started talking about the women in her speech as well as the many other women who had sustained her during challenging times in her life.

I said something I probably say once a week, “That would make a great book, let’s write a book.” And Justice Ginsburg said yes. And that was it, we were writing a book!

This was October 2019. Although her cancer had not yet returned, she was pretty frail. We had no idea this would be the last year of her life.

But her interest in passing on the stories of great women was incredibly strong and she was dedicated to getting this book done. In retrospect, I understand that it was an important part of her personal religious journey.

As a young girl in the 1930s and ‘40s, she was a conscientious Hebrew school student who absorbed the Torah stories and learned the prayers. But when she was 16, her mom died of cancer, and she was not allowed to say prayers for her because she was not a male.

At that moment, she left patriarchal Judaism. She remained a Jew, she was deeply Jewish, but replaced traditional practice with her passion for the humanity and bravery of Jewish women. Eventually, the Jewish world caught up with her, women became rabbis and she could return to the synagogue.

But I think the core of her Judaism was centered on the Jewish women who had been her role models. She wanted their stories to be told and passed on. She wanted them to be part of her legacy. 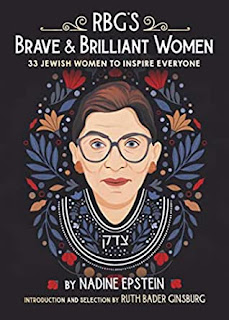 Q: How did you choose the women to include in the book?

A: She wanted so many women in the book! She started listing women she met or knew about or had read about. I added a few more women such as Queen Salome Alexandra—no one thinks about a queen of Israel. When Justice Ginsburg learned about her, she was very excited.

Really, it was very hard to narrow the list of women down to a doable amount. If she hadn’t died, we may have done more books.

Q: How does RBG fit into the group of women in the book?

I learned a lot about her from doing this book. One of the things I think about often—that I hadn’t known—is that this brave and brilliant woman had applied to be a clerk of the Supreme Court and was rejected because she was a woman.

Q: At what point in the writing of the book did she pass away?

A: We were both very busy. I was running a magazine and had other projects, and of course she was on the Supreme Court and was totally dedicated to her work.

The first thing we did was to choose the women and work on her introduction. Then in July 2020 I took off two weeks so I could start writing the biographies. I rented a cabin in Virginia.

That same day I got an email from Justice Ginsburg asking if she could see the manuscript right away because she would soon need to start reading for the Court’s fall term. I hadn’t started the manuscript! I asked her if I could have 10 days.

For 10 days I poured everything I could on paper. When I sent it to her she marked up every page with copious comments. Plus she kept sending me the names of more women she thought we should include.

In August 2020 we were doing one of our Big Question projects at Moment. The question was “Is society getting better or regressing?” and she participated. Then in September, she was gone.

I was shocked. I knew she was staving off cancer, as she described it, but I hadn’t expected her to die. I don’t think she expected it either. Her emails were all about the future, the term, our book. Her death was huge. After all, this was a joint project.

After she died, I wrote many more drafts and had a lot of people read the book. Justice Ginsburg, like me, was a perfectionist, and I wanted the book as close to perfect as possible. The project was a labor of love, and I hope that comes through in the book.

Q: Who do you see as the book’s audience, and what do you hope readers take away from it?

A: This is an intergenerational book for people 10 and up. Women and men and girls and boys of all ages will learn something from the book.

At first, though, we thought were writing for girls and women. But one of our readers, a 12-year-old boy read the first draft and said, “These women are amazing! Why is this book only for women and girls?” So I went back to the Justice, and we agreed that the book would be for all genders.

At events for the book, women and men buy the book for themselves and for their friends as well as the young people in their lives. It’s a beautiful gift book, and it’s very accessible.

And there’s a call to action at the end of the book. I discovered that our young test readers had no idea that women didn’t always have the same legal rights as men, and no idea that they still don’t. So we ask, now that you’ve learned about all these women and the evolution of women’s rights, what can you do?

The call to action includes some of Justice Ginsburg’s advice. She felt emotion did not belong in the struggle for women’s rights and human rights—that getting upset and calling people names is not how we bring people together to create positive change.

Ruth Bader Ginsburg changed the world by calmly focusing on long term strategy and changing the law, and then by becoming a role model to the nation. There’s so much to learn from her dedication, persistence and strength.

I hope the women in the book will inspire readers to continue Justice Ginsburg’s work on behalf of justice and fairness—and to find their own paths to truly making the world a better place for all of us!