Q: What inspired you to write your new book about New York City?

A: I started writing this book back in 2013, when Bloomberg was on his way out and DeBlasio was coming in.

It seemed with an avowed progressive coming into City Hall that an era was ending, one that had started 35 or so years before when Ed Koch came into office during the Fiscal Crisis.

The city had changed dramatically during that time, and we were talking about it in very binary, often overly broad ways.

For most of those years I’d lived on the Upper West Side and as much as I enjoyed and had been a part in my own ways of making some of those changes, the drawbacks and damage were also very apparent.

So I wanted to get beyond the phrases and buzz words and really explore WHO made the change and HOW it happened. I didn’t start with a hypothesis. I wasn’t trying to prove anything. I wanted to get to the bottom of it.

Q: In his New York Times review of the book, Kevin Baker says, “What he has produced is a tour de force, a work of astonishing breadth and depth that encompasses seminal changes in New York’s government and economy, along with deep dives into hip-hop, the AIDS crisis, the visual arts, housing, architecture and finance.” What do you think of that description, and how did you research the book?

A: Well, I really like that description! How couldn’t I? Obviously I was very pleased by that review—it’s hard enough to find someone who really understands what you’re trying to do as a writer, but then to have that person shout about it on the cover of the New York Times Book Review is a life event. 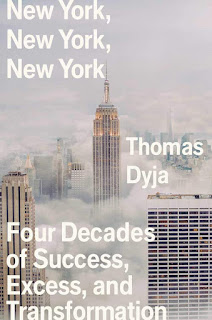 So yes, that was very much my intent. I don’t believe in easy answers, so this is a book made of many threads that are constantly weaving together and intersecting in time. That’s one metaphor. Nothing happens in a vacuum, so I’m very wary of theoretical constructs that prove points more than they embrace the very messy realities of how people lived.

Research involved an enormous amount of reading: Books, magazine, newspapers, oral histories. My editor just laughed when I said I wanted to include the bibliography.

Reading full issues of magazines like New York and The New Yorker were crucial not just for the content but for everything around it; the ads, the throwaway things that really touch the way we lived and what that said about us. Archives that break things down into just articles do an immense disservice to history.

I also interviewed a group of fascinating people, many of whom were central to all this change. They were happy to talk because the story that was being told about New York’s transformation tending to gloss over the work so many of them had been doing all those decades.

Q: The book is divided into four sections: Renaissance, Reconsideration, Reformation, and Reimagination. Can you describe how you decided to structure the book, and what these four groupings represent?

A: Larger circumstances made it that the mayors each represented a certain era, not always by their own creation.

But more importantly, I started with the belief that this wasn’t a book about triumph or failure. I was trying to explain change, in time, over generations. It wasn’t all good or all bad; causalities ran into each other and threads didn’t always fit within arbitrary boxes.

So I came to the idea of evolution as a better way of looking at the city. As it goes from Koch to Bloomberg, New York changes and more than once becomes a different place that is still the same place, if that makes sense.

Q: What would you say are some of the most common perceptions and misconceptions about New York City, and what do you see looking ahead for the city?

A: I think we tend to look at the famous people in New York, the big names, and believe they’re the movers and shakers, but it was exciting for me to discover just how much of the change—especially the positive change—was started by everyday people with a passion, with deep beliefs. Or by committed bureaucrats and administrators who believed change was possible.

The world thinks of New York as Your Name In Lights, but what makes the city work, the one we New Yorkers live in, are millions of New Yorkers each doing their part to make it run, and hopefully run better, and they’re often doing that out of the spotlight.

I want to believe that our future here is based on tapping that more, on not privileging money the way we have over the last 40 years to the same extent and focusing more on developing the nearly infinite reserves of human capital we have here to grow a city that rewards more than just those who can live in those awful supertall skyscrapers.

A: I’m circling around the next idea, but it’s too early to discuss! Watch this space.