Melissa Payne is the author of the new novel The Night of Many Endings. Her other books include Memories in the Drift. She lives in the foothills of the Rocky Mountains.

Q: You've said that an episode of This American Life provided some inspiration for your new novel. What about it captured your imagination?

A: On a snowy mountain day (much like in the book), I was listening to the episode called “The Room of Requirement” when I first heard about the Brautigan Library. Inspired by the American author Richard Brautigan and his fictional library, the real-life Brautigan Library accepts and catalogs submissions from aspiring writers.

As a writer, I was immediately drawn to the idea of a library for all.

In the interview, Mr. Barber described a few of the volumes housed at the library, including some from one of its most prolific contributors, Albert Helzner.

Mr. Helzner contributed 16 philosophical manuscripts to the library. He was a chemical engineer and a chess enthusiast by day, and a philosopher by night who wrote deeply thought-provoking pieces. He held a U.S. patent published in the professional journal Chemical Engineering and he also won a Massachusetts Class A chess championship.

As I listened to the episode, I started to feel those creative butterflies dancing inside, the ones I’ve learned to listen to because they mean an idea wants to grow.

I immediately connected to the writings of Mr. Helzner and could feel the passion in his thinking and in the observations he shared through his manuscripts. He questioned the simple interactions between people and strangers, and his writings shed light on an individual’s unique experiences that led that person to any particular moment in time.

Inspired by Mr. Helzner’s writings, I considered how our experiences affect our interactions and perceptions of people and strangers, and those butterflies kept dancing when I linked my thoughts with another idea about people experiencing homelessness and our public libraries. 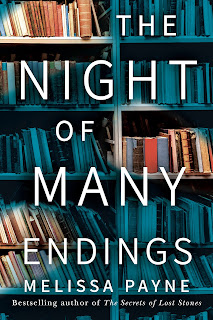 It didn’t take long before the idea grew into a small town, a snowstorm, and five strangers stranded at a library.

Q: How did you create your five characters, and how did you decide which of them would be point-of-view characters?

A: I started with the librarian, Nora. She was my main character whose story drives much of the interactions and connections with the others.

Marlene grew from a desire to create a character who pushes people away with her words. Don’t we all know someone like Marlene? I wanted to explore what was behind the words, what drove someone like Marlene and how she would react when faced with a night spent with strangers.

Lewis is a person experiencing homelessness, but I wanted to get past that definition to the person he was before that became all anyone else saw.

I choose those three perspectives to tell the story because in their own and very different ways, they keep everyone who loves them at a distance. In some respects, they had the most to lose and the most to gain from the night.

Jasmine reminded me of a young Nora, a little lost, a little bit alone and carrying a heavier load than most teenagers. And Vlado had the perfect combination of strength and steadiness that was needed to keep everyone feeling safe, despite the cold and dark.

Q: In our previous interview, we discussed the importance of setting and weather in your work. Can you describe how you wrote about the snowstorm in this novel?

A: I have lived through a similar snowstorm myself. That one dumped seven feet of snow and trapped us in our house for a week without heat or electricity until we were able to snowshoe down the driver of a front-end loader and hire him to come and dig us out. Much like Marlene, I’ll be telling stories about that storm for years to come.

So, I had my own memories of the cold and dark to work from when developing the storm in The Night of Many Endings and it was fun to make it come alive on the page. And perhaps a little more tolerable to experience it in writing instead of in real-life.

A: I wrote this during the height of the pandemic when family, friends and neighbors often stood on opposite sides of issues, leaving a no-man’s land where our stories lived.

I hope that readers enjoy spending the night with these five very different people as they let their barriers down and see one another for the individual they are inside.

A: My next book, due out November of 2022, brings back a touch of the magical realism that so many readers loved in The Secrets of Lost Stones, along with a host of lively characters and a couple of escaped pigs.

A: Connect with me on Instagram @melissapayne_writes or visit my website melissapayneauthor.com and drop me a note. I love to hear from readers and I especially love to visit with book clubs.