Q: What was the origin of the "Got Warrants?" posts?

A: The original "Got Warrants?" posts came to be on Facebook at the Bangor Maine Police Department Page. Updating the page became part of my job assignment in 2014 when I became the public information officer.

The feature really was a modern-day homage to the police beat columns that I read in daily papers when I was growing up in the ‘70s. I changed the tone of the reports by writing them with mildly sarcastic commentary intertwined with the story.

They became very popular, to the point where I began to write three new pieces every Wednesday.

Many departments were writing about warrant arrests that their officers were involved in, but ours was a little more in depth. Hyperbole was utilized, and sometimes musical references, comparisons to films, and really just a humorous take for folks to enjoy with coffee early in the morning.

In my first book, The Detective in the Dooryard, we included a long chapter of some of what we considered the best (or at least the most fun) of Got Warrants. My editor, Michael Steere, from Down East Books really pushed me to do an entire book of—mostly—new pieces. It took a while for me to sign on with the idea, but we did it.

We are happy with the book. I hope to see it on the toilet tanks in many homes across the world. The cover is mildly water-resistant, so that’s a win.

Q: How did you choose the reports to include in the book? 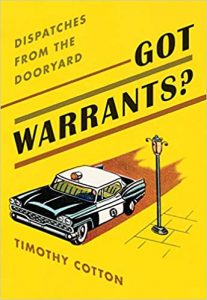 A: As the PIO, my job was to read every report, every day. Later, as the lieutenant in the Detective Division, I still read all the reports every day.

Most police reports are not newsworthy, but they are all interesting in their own way. So much bizarre behavior needs to be shared with the citizenry. We didn’t share names, or specific locations in the column, just the details (with some spice) so that folks could have an idea of what cops deal with on a shift.

The dealings rarely make the news, and this was a funny way to put it in the spotlight. I selected my favorites, wrote about them, and it’s really that simple.

Q: You write, "By the time you read this, there is a chance that I am no longer employed in the field of law enforcement..." Are you still a police officer at this point, and what might you want to do next?

A: Yes, I am still a cop. I was under the impression that I would be able to retire around November of this year, but it turned out not to be the case. I should have paid more attention. The stock market in 2008 had a lot to do with me still being here. So, I’ll be a here a bit longer, but not much.

In the future, without the having my wardrobe picked for me, I will probably just write, and pick up odd jobs.

My blog page, TimCottonWrites.com, has been a lot of fun, and that’s where I do most of my long-form daily writing now. We have about 15,000 subscribers to our “Newslog” (reads like a blog, but you get it sent directly to your email). I do at least one column each week.

I still have two books to be completed under this contract with Down East Books. One will be a fiction. I’ve offered to write self-help books, but I’ve had no takers. I will publish one per year for 2022 and 2023.

After that, I expect to be discarded into a pile of former writers. Who knows? If the good folks who read will buy my books, maybe someone will hire me to write a few more. I remain pessimistic about it.

A: I hope they read it and find a few stories that make them laugh. Seriously, I am not trying to change the world. I’ve tried that for the last 33 years as a cop. I’ve come to the conclusion that my impact has been minimal.

I do know that laughing makes me feel better, and I hope that I’m able to help a few other people do just that. If the last year has taught us anything, it is that we need something to do at home other than doom-scrolling and watching the next big problem develop in the world. I think this book will be a nice break from all of that.

A: I have a Facebook page @TimCottonWrites. We have about 64,000 followers. I write a few things there every week. We would love to have more folks come and enjoy it. It’s a great group.

Look for my books, even if you have to ask them to bring them out of the boxes in the back of the store; bookstore employees are kind. I appreciate the chance to answer a few questions.