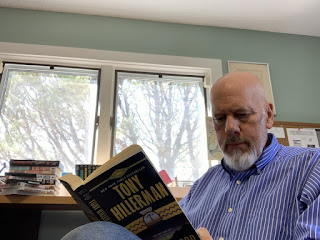 James McGrath Morris is the author of the new biography Tony Hillerman: A Life. It focuses on the writer Tony Hillerman, who created the fictional Navajo Tribal Police detectives Joe Leaphorn and Jim Chee. Morris's other books include Eye on the Struggle. He lives in Santa Fe, New Mexico.

Q: What initially inspired you to write a biography of author Tony Hillerman? Have you always been a fan of his work?

A: I’ve been a fan of Hillerman since the 1970s. However, what drew me to him was not one of his Navajo novels—there had only been two at that point.

Rather, it was his second book, The Fly on the Wall, a kind of cross between a journalism procedural mystery and a political crime novel. It’s still one of my favorite works of his.

What inspired me to spend several years researching and writing a biography is a belief that Hillerman’s work is more significantly important than that for which he’s usually given credit.

I also believed that a full-length account of his life and work would not only draw attention to his writing but also raise timely questions about cross-cultural communications in an era when we have grown sensitive about cultural appropriation.

Last, and this is important to all biographers, his life story is fascinating and action-packed, providing a strong narrative thread.

Q: In an interview with SantaFe.com, you said that Hillerman "changed the world of mystery writing." Can you say more about that, and about how you see his legacy today?

A: Yes, I can. When Hillerman was working on The Blessing Way, his first novel, he introduced a secondary character named Joe Leaphorn who was a Navajo Tribal Police detective.

Bookstore mystery shelves back then were loaded down with detective novels set in urban milieus, like those written by Raymond Chandler, Ross Macdonald, and other masters of the form.

Except for a little-known Australian writer, Arthur Upfield, the world of fictional detectives was white, male, and citified. A rez cop was something new and noteworthy. It forever changed the genre. 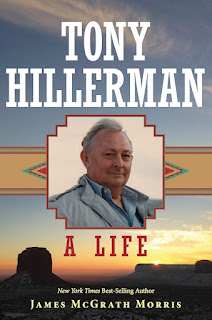 His enduring legacy is one of the reasons my publisher agreed to do this book and a new television series based on Hillerman’s books is being produced by Robert Redford and George R.R. Martin. It will air in 2022.

Q: How did you research Hillerman's life, and what did you learn that especially surprised you?

A: Like most biographies the research included a number of challenges.

To portray his childhood, I spent time exploring eastern Oklahoma, in particular the town of Sacred Heart. There I learned first-hand of the importance of Catholicism in Hillerman’s life and of his time attending elementary school with Pottawatomie children. The two aspects of his childhood would become really important when he became a writer.

As World War II was, as well. His near-death experience traumatized him. Later in life, when the term became used, he was diagnosed with PTSD. In my book, I suggest this was one of the reasons he became so drawn to Navajo spirituality.

A: I hope readers will take away a number of things from reading this book.

For fans of Hillerman they will learn how these books came to be created, how the plots were developed, and the struggles he had writing his books.

Second, I hope it might introduce his novels to another generation of readers.

Third, I hope the literary community will come to understand how significant Hillerman’s work was. I’m not denigrating other writers of murder mysteries by saying this, but Hillerman changed the craft in ways that very few other writers have done.

A: I’m working on two projects, neither of which are biographies. I’m trying to edit a collection of essays about the writing of biographies and I’m toying with writing a book about how to research books.

A: I don’t know if I’ll write another biography after this one.

This book has been different. Even though I studied Hillerman with critical eyes for three years, I come away with the sense that it was an honor to do this task and that is a very pleasant feeling.