Rich Podolsky is the author of the new book You Are Looking Live!: How The NFL Today Revolutionized Sports Broadcasting. His other books include Don Kirshner: The Man with the Golden Ear. A longtime writer and reporter, he has worked for a variety of publications and organizations, including CBS Sports, where he was a writer for The NFL Today.

Q: What inspired you to write You Are Looking Live!?

A: When Phyllis [George] passed away we were all so saddened. As I was reconnecting with my old NFL Today colleagues I realized what a tremendous impact the show had, not only on me, but on anyone who loved pro football.

As I dug a little deeper I discovered all the incredible changes that happened in 1975 with Bob Wussler becoming the new head of CBS Sports: first live show of its kind, first woman and first person of color on a show like this, etc.

Then a year later they added Jimmy The Greek to discuss point spreads when the NFL strictly forbade that. At that point I knew there was a terrific book waiting to be written.

Q: How would you describe the dynamics among Brent Musburger, Phyllis George, Irv Cross, and Jimmy "The Greek" Snyder?

A: In the beginning the four of them got along like kissing cousins. They rehearsed together for several weeks before the first show and hung out together off the set. That's why it worked so well.

Before '75 nothing was live except the games and all the pregame show announcers were middle-aged white men.

The combination of the new cast and lots more information was adored by the public. They opened the show saying "You are looking live" at this stadium or that one, and that was a cue to the gamblers what the weather was like. America had never seen a show like this before. 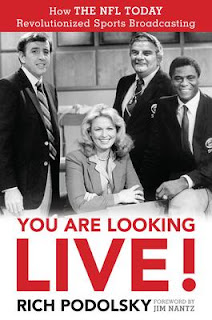 But as the years went on and the show became incredibly popular, they all began fighting for air time. One Sunday in October of 1980 it came to a head when Brent and The Greek went at each other after work at a bar called Peartrees. It made front-page headlines and the following Sunday they had their highest rating of the year.

A: It was easy for me to research the book because I had worked on the show. I was the writer on The NFL Today beginning in 1977 for a few years and remained at CBS through '82. I was able to get back in touch with many of my old friends to recollect the stories and discuss how the show became so important.

As far as something that surprised me, there was one big thing. In talking to Jayne Kennedy, who replaced Phyllis George for two years in 1978, I hadn't realized all the trauma she went through just to get an interview.

When she finally won a live audition against 15 other hand-picked candidates, she thought the job was hers. Then she was told she had to wait for the approval of CBS's Southern affiliates, because, as Jayne put it, "If I was added to the set, there would be two Blacks and only one white."

They solved that problem by bringing Jimmy The Greek to the set for the opening, which balanced out the color scheme, and those affiliates approved her hiring. It was kind of shocking to learn that it existed in 1978.

Q: What would you say is this early football show's legacy today?

A: That early show in '75 became the gold standard of all pregame shows. It was so good that in its first season it won 13 Emmy Awards--an incredible amount.

Tony Kornheiser, a former sports writer for The New York Times and The Washington Post and now a star on ESPN, said, "That NFL Today show was simply the greatest pregame show of all time. And everybody for the last 40 years has tried to copy it." That's its legacy.

A: Right now I'm still working feverishly on promoting the book. My previous two books were on music icons Don Kirshner and Neil Sedaka. I like writing about history so something will attract my interest soon and I'll begin digging to see who I can interview.

A: Yes, the book will be on sale everywhere books are sold Oct. 15.