Lori Rader-Day is the author of the new novel Death at Greenway. It is set in Agatha Christie's country home in England during World War II. Rader-Day's other books include The Lucky One and Under a Dark Sky. She lives in Chicago.

Q: What initially intrigued you about the use of Agatha Christie's holiday home as an evacuation site for London children in World War II, and at what point did you decide to write this novel?

A: I was reading a book about Agatha Christie (John Curran’s Agatha Christie’s Secret Notebooks) one night in bed and came across a little throwaway comment about how Greenway House, Christie’s beloved family retreat, had been used for child evacuees. I sat up in bed, I was so excited. Because I wanted to read that book.

The problem was, as I found out very quickly, the book didn’t yet exist. I didn’t think that I was the one who could write it, but I started tentatively imagining what it might look like.

I thought it might be a sort of Bedknobs and Broomsticks-at-Agatha-Christie’s-house thing with children cavorting and solving mysteries. A little bit of research set me straight that the children had been too young for that sort of thing.

I didn’t believe I could be the one to write this story for a long time, until I visited Greenway in 2016 and was allowed into a locked room to see a cabinet where the children had kept their things. On the shelves, the names of five little girls were still inscribed. Once I saw those names, the story was mine.

A: I approached the project hoping to use as much history as I could find, and when I ran out of fact I could find, I would rely on fiction.

I never thought the project would be easy, but as I started to research, to learn how to do the research, I kept finding more and more history that was relevant and important.

I’m really proud that there are characters in Death at Greenway with the real names of the people who lived and worked at Greenway, confirmed through research but I also came to understand what historical fiction writers had been telling me for years: Research can be a sinkhole. 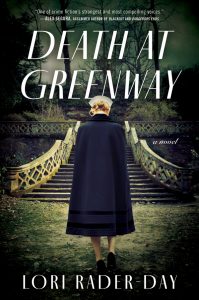 I lived inside Ancestry.com for six weeks until I finally resolved to put the research down and just tell the story. I’m glad I learned the history, though, because the book wouldn’t be what it is without having done that work. I didn’t just populate a story at a house owned by a famous writer.

In the end, the real lives and relationships of Greenway helped generate the fiction. The research brought Greenway to life for me. I hope readers feel the same.

Q: How did you create your characters Bridey and Gigi?

A: Bridey and Gigi came to me as names before characters. In early drafts, I didn’t have them differentiated properly, probably because they were both Bridgets, by design, a way to have two young women meet-cute. Over time, they started to pull away from each other and stand on their own. Revision is always the answer.

The moment that Bridey really came alive for me was during a full revision I undertook early in the pandemic.

I was marveling at how people were responding to the pandemic by putting on shows online and taking care of one another and baking bread and all the things good people did in March of 2020, thinking the pandemic would be over in a few weeks.

A few weeks? I had no such illusions, and I felt terrible with that knowledge. I thought to myself, I don’t have the Blitz spirit. Bridey took shape instantly from that line; I finally understood her. (I had to make sure “Blitz spirit” was a phrase used in 1941. This is what historical fiction is, checking every third word you type.)

Q: Agatha Christie barely appears in the action of the novel, and yet her presence hovers over everything. Why did you decide to structure the book that way?

A: The book was never about Agatha Christie. Early on, I didn’t want to include her at all, because I am such a fan and I hesitated to think I could get anything right about her true character.

But I learned she made the arrangement to rent the house to the group herself, and of course she would have been there to receive them. I could have written around that fact—if I had wanted to write out fact.

However, in their autobiographies both Christie and her husband wrote about the moment war against Germany was declared. They’d been listening to the Prime Minister’s speech on the wireless in the kitchen at Greenway. I couldn’t ignore that moment.

What I wanted, instead of a story about Agatha Christie, was to have her presence loom large over the house and to have a lasting effect on everyone who converged there.

It’s a story about the house more than the woman. I wanted to show Greenway’s role in safeguarding the children but also in keeping a community and, as readers will find in the book, in helping to bring about the war’s eventual end.

The thing I wanted to get through in Death at Greenway is that Greenway was a soft place to land for its evacuees.

I corresponded with one of the Greenway ’vacs, who is now 82 and living in Canada, and that’s what she remembered. Not war, not being away from her family. She remembered being in a safe place and being loved.

Greenway was and remains a special place. The Mallowans loved and improved it, and the National Trust has preserved it. We’re all just stewards, I guess, but after Agatha appeared in the Greenway kitchen, it would have been a crime to leave her out.

A: Keeping an eye out for my next project. It remains elusive at the moment. I’m hoping another idea will strike me between the eyes like Greenway did, but it’s hard to move on. Greenway is so very pleasant…

A: In the course of my research, the National Trust allowed me to stay at Greenway for three nights.

My husband and I had the place mostly to ourselves after hours, and we used all our daylight hours tramping around the grounds and into town to know what it was like to be stranded at the house, as the real nurses would have been. We also sat on the hill overlooking the River Dart and toasted Agatha and Max and the lovely home they made.

Writing novels isn’t usually as glamorous as this, so I might dine on those three nights for a long time to come.