Lọlá Ákínmádé Åkerström is the author of the new novel In Every Mirror She's Black. She also has written the book LAGOM: Swedish Secret of Living Well, and her work has appeared in a variety of publications, including National Geographic Traveler and The Guardian. She is Nigerian-American and is based in Sweden.

Q: You’ve said of In Every Mirror She’s Black, “I wanted to pull out the nuances of navigating the world in my skin against the backdrop of very different cultures.” How did you create your characters Kemi, Brittany-Rae, and Muna?

A: I knew I needed to explore this topic along the lines of career, class, and culture. That was why I created three distinct characters so Kemi can spotlight career, Brittany-Rae can wear class, and Muna can navigate culture in the book. 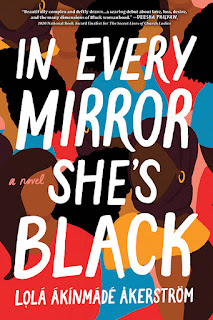 A: I didn't know how the novel would end before I started. But since I spent four to five months fully developing and outlining the characters before starting the actual process, I knew each character as people so deeply that their actions and decisions actually guided the direction of the writing.

Q: The Kirkus Review of the book says, "Åkerström paints an admirably rich portrait of a particular culture—its nuances, norms, and idiosyncrasies—raising important questions of prejudice, racial bias, agency, and belonging." What do you think of that description?

A: I think it is. Before IEMSB, I wrote LAGOM - The Swedish Secret of Living Well, which delves into the mindset of Swedish society and is available in 18 foreign language editions.

So, before I wrote my novel, I was already coming with a deep well of cultural understanding in terms of nuances and norms, and could write fully as both an insider and an outsider.

Q: As someone who is Nigerian-American and based in Sweden, how would you compare race relations in Sweden to the situation in other countries where you've lived?

A: In my book, a man who Kemi meets at the bus stop named Godwin says it best: “At least in America, you’re fighting your enemy in broad daylight.”

That says a lot about race relations in Europe really, versus in the U.S.

A: More books are in the works as well as fleshing out a couple ideas and following the stories of more characters from IEMSB.