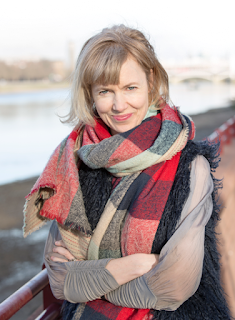 Annabel Abbs is the author of the new historical novel Miss Eliza's English Kitchen. It is based on the life of 19th century cookbook writer Eliza Acton and her assistant, Ann Kirby. Abbs's other books include the novel The Joyce Girl. She lives in London and in Sussex, UK.

Q: You've said you first learned of Eliza Acton when you inherited your mother-in-law's cookbook collection. What made you decide to write this novel based on Eliza's life?

A: There were lots of fascinating food writers in my collection but research suggested that Eliza Acton had the most interesting backstory.

She was also one of the most successful cookery writers – and a pioneer in her own right. She invented the recipe that we use today, with a list of measured ingredients and instructions on time and temperature. Before Eliza, recipes were little more than a string of often haphazard instructions.

Moreover, I discovered that a third of Eliza’s recipes had been plundered and plagiarized by the much better-known Mrs. Beeton. I decided that Eliza needed to be restored in some way. As much of the information about her lacked sources, a biography was out of the question. So my research became a novel, as rooted in fact as I could make it…

Q: How would you compare Eliza to some of the other women you've written about?

A: My previous protagonists lived in the 20th century, but Eliza is early Victorian and was actually born at the tail end of the 18th century, so the time period is very different.

But like my later characters, Eliza wanted to make a life of her own and a name for herself. In this respect, she’s very similar – but more radical because Victorian women weren’t supposed to want a public life, or to want independence.

Most poetry and cookery books were published anonymously at this time, but Eliza was determined to have her name on both her poetry and her food writing. I loved how feisty and determined she was. She had real courage!

Q: How did you research Eliza's life, and also that of her assistant, Ann Kirby? 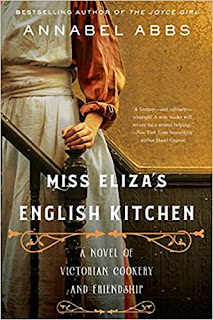 A: I read a lot of old cookery books – both those in my collection and those in public libraries with antiquarian cookbook collections. And I cooked using the sorts of implements that Eliza and Ann would have cooked with (which was exhausting!).

Food history books were essential so that I could understand the tastes and flavors of the time. I also read Eliza’s poetry and her own two cookbooks, all of which showcase her voice beautifully. I read novels set in the same period or by authors writing at the time, and I steeped myself in the work of early Victorian female poets.

There are a couple of short biographies of Eliza that were useful, but Ann Kirby left nothing of herself, so she is largely fictitious.

I also spent time in the town where the two women lived and cooked for 10 years, attempting to follow in their footsteps. The town has changed beyond recognition so I also spent some time delving into its past and trying to imagine how it would have looked, sounded, smelled, and felt 200 years ago.

Finally, I visited as many “old” kitchens as possible. Luckily the UK is rich in historic buildings, many of which have authentically restored kitchens.

Q: How would you describe the dynamic between the two, and also their legacies today?

A: The relationship between Eliza and Ann struck me as unusually close. We know from census reports that Ann lived in Eliza’s house for 10 years and that, for some of that time, she was the only other person living there.

We also know from historic accounts that very few servants stayed as long as a decade with one family – staff turnover was usually very high. And throughout Eliza’s debut cookbook she refers to “we,” so I knew she wasn’t working alone (which would have been impossible back then anyway because of the sheer amount of work required to prepare a meal!).

In my imagination, the relationship developed along certain lines – which I won’t mention to avoid any spoiler alerting. But I figured that working every day in a kitchen for a decade would have fostered a bond of some depth between the women.

There’s an intimacy and rhythm to cooking together, which I felt would have enabled the two women to transcend their huge class differences. I think preparing food with other people lends itself to friendship. And the experience is nourished by then eating together.

A: I’m currently working on a book about insomniac women – I can’t say more than that!

A: Only to say that cooking as our Victorian forebears cooked is very different from cooking today – it was much more physically grueling and demanding, as well as hot, smoky, and smelly.

Temperatures were inconsistent, water had to be carried from outside, pans were huge and made of iron. No Magimixes, Kitchenaids or electric whisks. No overhead lights, extractor fans or microwaves. No fridges, freezers or out-of-season blueberries. Eliza thought all her kitchen work destroyed her health – she may have been right.