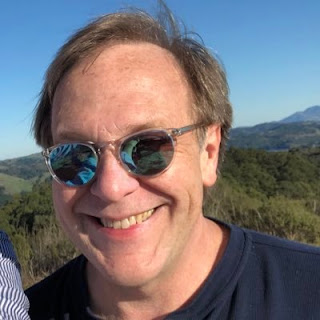 Mark Scarbrough is the author of the new memoir Bookmarked: How the Great Works of Western Literature F*cked Up My Life. He has written more than 30 cookbooks, including Instant Pot Bible: Copycat Recipes, and he hosts several podcasts.

Q: What inspired you to write Bookmarked?

A: Writing the thing is quite a story. (But seriously, that’s true for almost every memoir, right?)

I started the book by writing a scene about a kid preaching the Gospel at Texas county fairs and rodeos. I thought I was writing a novel. But I could never get that character to connect directly with me. He was always a struggle to voice.

Over time, I came to see that I could only write him if he was me. And so the memoir took off from a bunch of fragments about an innocent little boy being used as a prop to get sinners to come fast to a tent revival.

Q: The writer Will Schwalbe said of the book, “Mark Scarbrough summons a host of greats — Chaucer to Henry James — to show the danger of accepting the stories we are told by our parents, our partners, and even the very authors whose books we treasure.” What do you think of that description?

A: Frankly, I think it’s great. And although my story is about an adopted kid who was ill-prepared to fall into the quantum reality that literature creates, the zillions of timelines zipping in every direction from all the books we read, and our only true encounter with the multiverse, I do indeed think we all struggle with the many stories in our heads.

We internalize voices. We start to repeat storytelling patterns as if they were our own. I did with books until my psyche broke.

But I have a feeling a similar thing happens with lots of people, maybe not with literature as the besetting sin, but with the stories their parents, siblings, spouses, lovers, and friends have repeated in their ears until those stories become an adopted pattern, an identity, a reality that looks like home but is actually far from it. 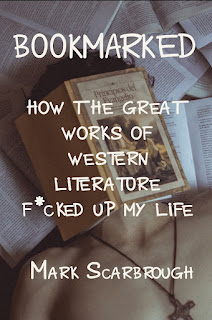 A: An all-encompassing experience, Bookmarked took four years to write, partly because my husband and I wrote and published five cookbooks over that same time period, but most because I had to dig so deep to get the story told.

And I’m a psychotherapy junkie! I guess I knew at the start that I had to be brave. I didn’t know I had to be braver than I’d ever imagined. Still, it wasn’t a heroic act to write it. Instead, it felt as if I pulled my bones out one by one and wore them on top of my skin.

A: It was my AOL email address for years: bookmarked. It’s how I was cyber-known. And it seemed like the best way to explain who I was. The subtitle is admittedly crass, crude, even eye-catching. I wanted something that stood out. I had to find a publisher who’d let me stand out in that way. Not an easy task.

A: My husband, Bruce Weinstein, and I have a cookbook due to Little, Brown on 12/15. It should be consuming my life. Instead, I’m in the middle of an eight-week seminar on George Eliot’s Middlemarch with over 200 Zoom participants at a local library.

And yes, there are new pieces of a novel on my laptop: about a travel clerk in the ‘50s, the kind of woman the oil companies had on staff to help people plan their trips across the country.

My travel clerk has been nowhere until she falls in with Wernher von Braun and is almost consumed by the plots of history. It also happens to bear a slight resemblance to my mother’s story. Needless to say, it’s an ambitious story. But I’m an ambitious guy.

A: My memoir, Bookmarked, is something of a strange beast. It’s about the dangers of reading. I know: we all tout its benefits. And those benefits are real! But there are also dangers in letting the thoughts of others take over your consciousnesses.

We make reading seem easier than it is. But it’s person-building. And so it can be a scary thing to do, even when it looks comfy and warm on a winter night as we sit with a good book in front of the fire.