Janet Beard is the author of the new novel The Ballad of Laurel Springs. Her other books include the novel The Atomic City Girls. She lives in Columbus, Ohio.

Q: What inspired you to write The Ballad of Laurel Springs, and how did you choose the ballads you include in the novel?

A: I’ve been interested in Appalachian folk songs since I first heard them as a child.

In particular, I was intrigued by murder ballads that told the stories of young girls being killed. Why do we choose to pass these stories down and what they can tell us about being a woman in this society? I listened to lots of these old songs and chose some of my favorites to incorporate into the novel.

It was also important to me to use a variety of music, including blues and gospel, to create a full reflection of Appalachian culture.

Q: The book includes multiple generations of women in the same family. How did you create your characters?

A: At first, I worked on each character separately. Generally, the women’s stories came first. Once I knew where the plot was taking them, I began fleshing the characters out and finding their individual voices. As I went along, I also thought about what made each woman different from the others, as well as what they had in common.

A: My research was varied since the book spans such a long time period. Obviously, I had to spend more time learning about daily life for the chapters taking place in the late 19th/early 20th century, than the later chapters. 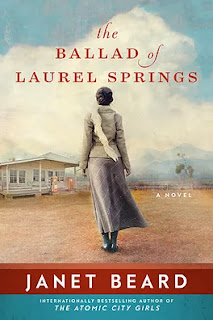 I also read more generally about Appalachian history, culture, and folklore. Being from Appalachia myself, I am keenly aware of how the region has often been misrepresented in the broader culture. I strive to avoid this in my own writing, in large part through this research.

The long history of ballad collecting in Appalachia is fascinating, and I was surprised to learn the extent to which our written records of folksongs were at times manipulated by early folklorists to reflect their existing ideas about race and society. The more I read about Appalachia, the more I realize our portraits of the place are never straightforward.

Q: The writer Amy Jo Burns says of the book, "The Ballad of Laurel Springs sets the resonant violence of family secrets to the music of the mountains." What do you think the book says about family secrets?

A: I think family secrets are dangerous.

Often younger generations can tell when something has been kept from them and create their own explanations that may or may not be true. They misunderstand their elders and miss out on important lessons, thus repeating the same bad patterns that led to the secrets in the first place.

Secrets keep us from learning what we should from the past.

A: I am working on something set in East Tennessee but entirely in a two-month period of the recent past. It’s about three very different families living on a dead-end road in a mountain hollow and how their interactions impact one another.

A: By telling the individual stories of a family in The Ballad of Laurel Springs, I am also exploring the impact of the stories we tell or the songs we sing.

I’m interested in both what happens to each character in the moment and how the stories that get passed down about those events impact future generations.