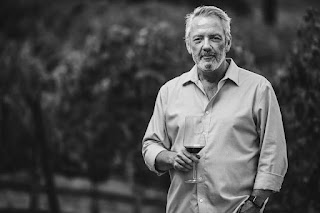 Steven Kent Mirassou is the author of the new book Lineage: Life and Love and Six Generations in California Wine. His family has been in the winemaking business in the United States for 165 years. He lives in Pleasanton, California.

Q: What inspired you to write Lineage?

A: I wanted to write a book that tried to capture what it felt like to be “behind-the-scenes” in all aspects of making wine.

I wanted to convey the sometimes overwhelming feeling a winemaker has in a cold cellar, alone, helping to shepherd unruly nature into something memorable, magical, and beguiling.

I also wanted to explore the role that wine plays in the universe of hospitality, an undervalued industry that seeks to take care of people by bringing them joy and richness.

Lineage: Life and Love and Six Generations in California Wine also gave me the opportunity to reflect on the role my family and my appellation has played in the world of wine and why we should not be forgotten.

Q: On your blog, you wrote, "The process of writing the book changed me in profound ways..." Can you say more about that?

A: I believed, as a graduate student, in the romantic notion of the next “Great American Novelist,” and at that point in my life, I was ill-equipped emotionally to make the commitment to the process that great writing required.

As I became immersed in winemaking and the vintages started to add up, I assumed that having a career as a writer was not going to happen.

Because of the enthusiasm for my writing by people around me (including my future publisher), and because of the evolved perspective that age brings, I was able to get past a role that was never mine to play, hunker down and put pen to paper every night and transform the enthusiasms of a young man into the finished work of his older self. 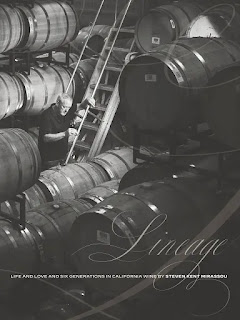 Q: What do you think the book says about family, about winemaking, and about family traditions?

A: Lineage celebrates a life devoted to experiencing the world in a sensory and sensual fashion, of finding truth in the pursuit of helping to transform unruly nature into that magical thing that has inspired history, religion, and culture for thousands of years.

Lineage is also about one family’s pursuit to reach the highest pinnacle of quality in its chosen pursuit, and not to accept anything less than total devotion to the craft that brings such joy and richness to people’s lives.

I am constantly reminded of and humbled by the idea of generational connection. I can’t help but feel part of a secular priesthood, whose generations of family have continued to carry the idea that one’s personal philosophy and personal quest for enlightenment and emotional connection can be embodied in the fruit in the vine.

Q: Which of your wines would you particularly recommend?

A: Selfishly, I can recommend all my wines because they are made to not only be delicious but also to connect with people on an emotional level. Because Cabernet Franc is my favorite variety, the wine that we make from this grape (L’Autre Côte and Lineage) are the most profound, delicious, and sexy!

A: I am currently working on a book about Cabernet Franc detailing those regions that produce the best versions of the wine and diving deeply into what is so esthetically compelling about the grape.

I am also working on a novel (or series of books) about a preternaturally gifted girl who has the ability to [travel] through time and who may or may not be a psychopath.

A: I am excited that Lineage puts the lie to the notion that writing is a young person’s game and that - after a certain age - one isn’t capable of radically transforming one’s personal life.

The process of writing this book has been a gift to the ever-present goal of living life to the fullest and working to create something that will change people’s perspectives.