Lara Stapleton is the author of the new story collection The Ruin of Everything. She also has written the story collection The Lowest Blue Flame Before Nothing, and her work has appeared in a variety of publications, including the Los Angeles Review of Books and Glimmer Train. She is based in New York City.

Q: Over how long a period did you write the stories in The Ruin of Everything?

A: I wrote them over a period of about 20 years! Most are from the early aughts, but “Flesh and Blood” I wrote in 2020. This is why they vary so wildly in structure.

Q: How did you choose the order in which the stories would appear in the collection?

A: Instinct, but I think those instincts are a series of small decisions. They grow more experimental toward the end.

“Until It Comes to You,” the second-to-last, joins with another character; she imitates what she believes to be his style of thinking. So it stops becoming a narrative, really, and becomes a stream of consciousness, and her assertion of conjoining.

The last plays with the boundaries of character. The main character is named after me, and she is a writer, but I enjoy asserting that she’s not me; I find it a little funny, for one thing, but I also like the questions such an experiment raises.

The first two stories, especially the second, are my most traditional. I guess I put “Alpha Male” first because it’s one of my favorites. I like the density of the piece, and the way time piles up quickly, more episodic than scene-based. The second is a more old-fashioned second-generation immigrant family tale.

Originally, I had planned to do a whole book of stories about a breakup, using the same name for the characters, but having them be different people, having the circumstances of the breakups vary, but be related. I imagined it like a cubist portrait, where the point of view contradicts in various sections, but it adds up to a psychological whole.

I think I’ve done some of that, but the whole book didn’t turn out in that style. But the order kind of emphasizes these experiments with character more as the book goes along.

Q: You've said that in your writing, you "like reminding readers that they're dealing with artifice, something constructed." Can you say more about that, and about how it plays out in these stories? 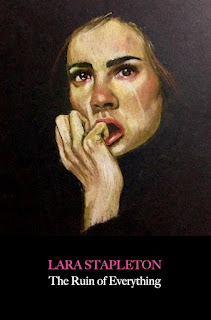 A: I love this question, thank you! By using the same name for different characters for most of the book, Tommy, and by using my name for the final narrator, I am playing with the boundaries of character.

I’m hinting that this is a story, hopefully without breaking the dream state of reading. I want readers to theorize about how this all adds up, this same name for different people.

This is different from the story forms that were really considered ideal as I was coming of age, the quiet epiphany, or the repression of epiphany, Raymond Carver grounded in Hemingway. They’re both great writers, they’re just not what I want to do. The workshop was usually about how real a story is.

I still work in this form sometimes; it’s such a part of my reading and writing experience, the way my generation of writers was built, but I like that I see more variation in form getting published now.

I don’t think that how real it is is as important as how interesting it is.

As I mentioned in discussing the order, I want to emphasize that something is more important than the characters, than the individual variations on loss.

The way that I think about that something is as a meditation on grief, the early childhood trauma of loss and the way it echoes in adulthood. I’m studying the ways people construct their loneliness, or can’t fight their way out of it. I like the way my book jacket describes it, “a sad-clown funhouse hall of mirrors.”

Let me emphasize their differences by creating similarities that stick out, bounce off one another. Two similar but different shades of orange juxtaposed will either emphasize the difference or begin to flow together. I’m thinking of that experience.

I was inspired by writers like Maria Irene Fornes, who has a play in which actors drop their characters between scenes and move as themselves. The play is saying, “Hey, we’re not pretending not to be a play.”

It’s a post-modern move, sifting through text. It’s something young readers experience in their daily lives, as they have been raised on social media. I don’t pretend this is something new; post-modernism is two or three generations in now, but it interests me.

A: The Ruin of Everything comes from lines in two stories, “The Other Realm” and “Godspeed.” They’re both from lines in which the narrator is locating the beginning of the end of her relationship.

Both times, the narrator truly feels like a victim of a series of events, and in both stories, as in many stories in the collection, the stories themselves hint that the ruin comes from some childhood heartbreak that created her clumsy intimacy.

All along she expects such loss, and I find the question interesting: is she creating these circumstances? Is it all as inevitable as she sees it to be? I’m unsure often, but I like creating the question.

A: I am working on a novel about a young woman who is self-made from a working-class background, an insatiable reader, who becomes very well-educated, a part of New York literati scenes. She’s not a successful writer, though she runs among them.

Eventually, she rejects all of it and tries to become who she was before the education. That’s the premise, at least for now, but I’ve just begun.

A: I’d like to say something about the cover, which I just happened upon Googling around!

It’s a piece by Nanette Nacora Catigbe, and two things made it perfect for the book, and made it reinforce the way I try to play with character. Through sheer luck, it reinforced that meta quality.

First of all, the woman seems performative, like whatever she’s telling herself she’s suffering may not be that bad. I hope that some of my characters come across that way.

Secondly, she looks like a young me! That is pure coincidence, and it cracks me up, and goes with the story “Flesh and Blood,” though even if she looks like me, she’s not me.