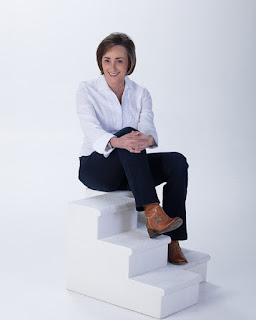 Margaret Verble is the author of the new novel When Two Feathers Fell from the Sky. Her other books include the novel Maud's Line. An enrolled citizen of the Cherokee Nation of Oklahoma, she lives in Lexington, Kentucky.

Q: In your new novel's acknowledgments, you write, "Although the events in this book are entirely fiction, many of the characters are based on the lives of real people..." Can you say more about those people?

The Shackleford/Caldwell characters are the ones most closely crafted to the actual people. In part, that’s because the Caldwells were rich and white and involved in a major scandal, so they were often in the newspaper.

The other two families were/are African American so, unfortunately, there isn’t as much information available on them. Their two major characters in the book, Hank and Bonita, are entirely fictional.

The other major character based on an actual person is Clive Lovett -- Clare Lovett in real life. He was the zoo’s manager and, evidently, beloved by just about everybody.

A horse diver named Two Feathers did work at Glendale. But she’s mentioned only in advertisements and I suspect she was a white person impersonating an Indian.

However, her employers in the book, the Miller Brothers, were very much real flesh and blood. There are at least a couple of books written about them, and I pulled their personalities and the details of the 101 Ranch from those books.

Q: How did you research the time period you write about?

A: I’d previously researched the decade of the 1920s when I wrote Maud’s Line. It’s set mostly in 1928 and this book is set in 1926. But Maud’s Line happens in Oklahoma and When Two Feathers Fell From the Sky happens in Nashville.

So I had to do some reading about Nashville, and I particularly needed to read about the Glendale Park Zoo. The only book I found about it, Glendale’s Magical Park, by Andy Lane, was written for children. So I relied heavily on the archives of The Nashville Tennessean, which, fortunately, are on line.

Q: The Publishers Weekly review of the book says, "Verble beautifully weaves period details with the cast’s histories, and enthralls with the supernatural elements, which are made as real for the reader as they are for the characters." What do you think of that assessment?

A: I think it’s awfully nice of them to say that and I hope other readers feel the same.

A: I’m not ready to talk about what I’m writing at the moment except to say that I work on it the first thing every morning and it’s the best part of my day.