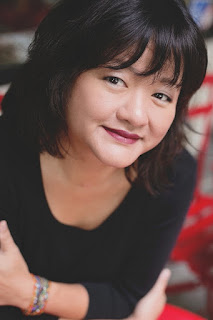 Shirin Yim Bridges is the author of the new children's picture book Get Up, Elizabeth!. Her many other books include Ruby's Wish.

Q: How did you come up with the idea for Get Up, Elizabeth!?

A: I write a lot about women and history—it stems from a lifelong interest in history. One of my favorite books as a kid was People in History. From the beginning, Elizabeth I was one of my favorites. She was a woman in a man’s world—she walked a fine line to keep power rather than giving it up in a male-dominated culture. I got fascinated by history in general. As an adult, I read a lot of Tudor biographies.

I had invited a friend, Laura Atkins, to teach a children’s book writing class, and I was sitting in on it. She set an exercise for the class—she said to take a fact and see what you can do to turn it into a story. I had just read Tracy Borman’s book The Private Lives of the Tudors, which is full of fascinating information, and I thought, “Wouldn’t it be fun for a kid to read about Tudor life?” 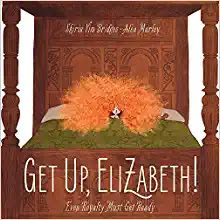 I thought about all the strange things they did to get out of bed. I’m a doting aunt and I know it’s a struggle to get kids out of bed. All you see [in Get Up, Elizabeth!] is all this red hair. Each thing she does gets odder and odder, and you find out it’s because it’s set in Tudor times and she’s Elizabeth I.

Q: What do you think accounts for the ongoing interest in the Tudors today?

A: Start with their costumes. The Tudors series on TV—I was such a Tudor nerd, I would say, “That’s not a Tudor hat!” You don’t have to fix anything with the Tudors. What they already did was so rich, you don’t have to come up with new ways of dressing them. I used to be a creative director, and it’s hard not to put your own twist on it!

They represented the beginning of modern English history. We’re out of the Dark Ages. There’s correspondence between different courts. Tudor houses are still standing. There are castles from the 1100s, but this is the first time you see a farmer’s house. They’re far back enough to be intriguing but close enough that you can put your hands on it.

And it was a short dynasty—there were six of them—but in that short time, so much happened. The Henry VIII story is melodrama writ large. Mary had a sad and dramatic story. With Elizabeth, I think a lot of people have the same fascination I do. She managed to crack the code, hang onto power for a long time, and do it well enough.

As a woman, she did it in a different way than a man would have. She didn’t throw her weight around the way her father did. The Privy Council and Parliament were on her case from the time she was 25 to her 60s—they harangued her to get married, and she resisted.

Q: What kind of research did you do for the book?

A: The research was a lot of fun. I was already starting with a topic I knew quite a lot about, and it was a matter of beefing it up and making sure all the resources said the same thing.

Q: What do you think Alea Marley’s illustrations add to the story?

A: Elizabeth I was so well known for being a redhead. I thought it would be fun if you couldn’t really see her [behind all her hair], and then she was all dressed up at the end—there was the contrast between the public figure, and the fact that she was just a little girl.

I really liked the palate overall. I never spoke directly to the illustrator until after the book was done, but the designer was careful in asking me about references and colors. It was fun working with them on the visual aspects.

Alea had the great idea of putting a mouse in on every single page. My 7-year-old niece read the book with me, and I realized she was poring through the pages trying to find the mouse. It adds a lovely sense of humor.

A: I came up with the idea of how to do two companion books—it’s not Elizabeth but other figures in history doing things kids need to do every day. One is due out next year and I’m hoping for a third a year after that.