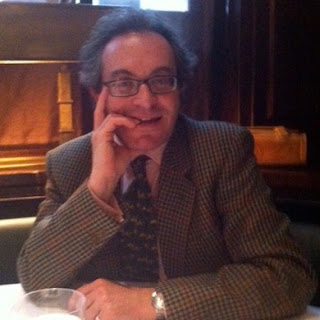 David Long is the author of the new children's book The World's Most Magnificent Machines. His many other books include Survivors and Heroes.

Q: How did you come up with the idea for The World's Most Magnificent Machines, and how did you choose the machines to include?

A: I was a journalist for 25 years, during which time I drove and wrote about literally thousands of new cars as well as ships, boats, trains, and aircraft. I’ve always been interested in this sort of thing so it was probably natural that eventually I would have another go at writing about them, this time for a younger audience.

I was keen to avoid simply covering the largest, fastest, most expensive, etc. - although some of these have to be included - and so I made a selection of machines which interested me the most and which, I hope, say something about the age that produced them. I’m very happy with the result and Simon Tyler’s illustrations really bring out the best in the ones I picked. 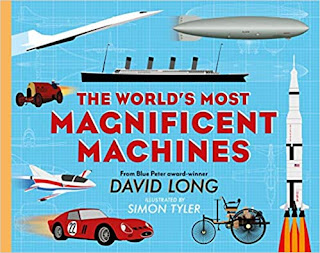 A: I love researching a new subject as much as I like writing and I found all sorts of surprising things.

The Hindenburg is still the largest man-made vehicle, after nearly 100 years, and the Saturn V rocket contains an incredible 3 million components. The Apollo Moon-landings had to be in the book because I still remember watching the first one when I was 8, it was so exciting, since I’ve been lucky enough to shake hands with two of the 12 men who walked on the Moon’s surface.

I also wanted to include a few of the madder ideas, like an eight-wheeled car and a one-wheeled motorbike. The first man to pedal a plane across the English Channel is also in there, because it’s such a clever idea.

Q: Of the various machines you wrote about, were there a few that really stood out for you as particularly significant?

A: Saturn V for the reasons just stated, and the Ferrari 250 GTO is a car I’ve been lucky enough to drive on several different occasions. Only 36 were made and I’ve driven nearly a tenth of them!

Sadly, several equally special machines had to be left out because it’s already an enormous, heavy book with the ones I’ve included.

Most obviously (for me) the Ford Model T. It's probably the most important car ever built because it genuinely changed the world. I’m a huge fan as you can probably tell, and previously wrote a biography of Henry Ford, the car's creator. Unfortunately it's also one of the hardest cars I’ve driven and one the slowest.

Other than that I didn’t want to include too many military machines, as it’s not a book about war, but some had to go in because history shows time and again how war has provided an important boost to innovation. Machines designed to kill people have often led to developments which benefit all of us one way or another, and it’s important to acknowledge that.

A: The book is a lot of fun to read and I’d like them to come away with a  better understanding of varied nature of engineering, and the incredible ingenuity which has produced such a wide variety of amazing machines. I’m not an engineer myself, far from it, but I have the greatest respect for them, these brilliant men and women who have achieved so many great things in so many different areas of life.

That’s why I dedicated the book to an engineer, Dr Alex Moulton, who was one of the most interesting men I have ever met. He designed the suspension for the original Mini (without this it wouldn’t have been half the car it was) as well as a brilliant new type of bicycle, one of which I am fortunate to own and ride.

A: I’ve just finished a book for children about RMS Titanic, which tells the story of her design and construction as well as explaining the terrible tragedy which unfolded in the cold waters of the north Atlantic. It’s another great story which I find just as fascinating as the triumph of the Apollo missions, although it has a dreadful ending.

It’s one of several books I have written for dyslexics and reluctant readers, which is something I’m very interested in. Reading has given me so much pleasure over the years and I really wish everyone could experience that same pleasure instead of finding reading a difficult chore.

A: Yes. I love hearing from readers and I am always happy to answer questions from youngsters (or their parents and teachers) about the books I write. The easiest way to reach me is via my website - www.davidlong.info - and I promise to answer every question as best I can.