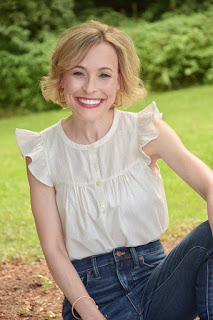 Eileen Moskowitz-Palma is the author of School Squad, a new middle grade novel for kids. It's the second in her Popularity Pact series, which began with Camp Clique. A former elementary school teacher, she teaches at Sarah Lawrence College's The Writing Institute. She lives in Westchester, New York.

Q: This is the second book in your series about Bea and Maisy--do you think the characters have changed from one book to the next?

A: Definitely! I wouldn’t feel like I did my job as an author if the girls had stayed the same.

Maisy changes in Camp Clique after she experiences authentic friendship with her bunkmates at Camp Amelia. Spending time with girls who lift each other up inspires Maisy to finally be honest with Bea about the problem waiting for her back home, which helps her understand the importance of real friends.

When School Squad opens, hanging out with the popular group, the M & Ms, isn’t so important to Maisy anymore.

Meanwhile, Bea’s obsession with popularity seeps into every interaction Maisy has with her. Bea spends the entirety of School Squad changing everything about herself to fit in, not just with the popular group at school, but with her father’s new blended family. Bea makes mistake after mistake before she finally learns the message that authentic friendship is more important than fitting in. 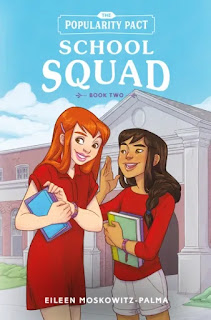 Both girls change throughout the series in the ways that they view the world, and with their actions while on their journey to learn about authentic friendship.

Q: Did you know how this second book would end before you started writing it, or did you make many changes along the way?

A: My agent sold The Popularity Pact to Running Press Kids as a two book series, with Camp Clique fully written and School Squad outlined. That outline served as a road map while I wrote School Squad. The beginning and the ending stayed the same, and I made a couple of detours along the way as the story started to take shape.

I am a firm believer in figuring out who your characters are and outlining the novel before beginning. But I also allow the magic to take place once I start writing, and I fully embrace the detours along the way to the finish.

Q: What do your books say about cliques--whether at school or camp?

A: The message of both books is that authentic friendship is more important than fitting in. I make it clear that it is better to spend time with one real friend, or a small group of authentic friends than to surround yourself with a clique of fake friends.

Q: Can you say more about what you hope kids take away from School Squad?

A: You should never have to change who you are for someone to love you. It takes Bea both books and several big mistakes before she finally learns that lesson.

Q: What are you working on now? Will there be a third book in the series?

A: I intended for The Popularity Pact to be a two-book series, so it is complete…for now. You never know if I will get the spark of an idea that will bring Maisy and Bea back.

I recently started outlining and writing a new book called Sixth Grade Switch, which is a Freaky Friday and Back to the Future mashup, including body swapping and time travel.