Alexis O'Neill is the author of the new children's picture book biography The Efficient, Inventive (Often Annoying) Melvil Dewey, which focuses on the controversial creator of the Dewey Decimal system. Her other books include The Recess Queen and Loud Emily. She lives in Southern California.

Q: Why did you decide to write a children's picture book about Melvil Dewey?

A: A few years ago, a librarian who knew I was a former elementary school teacher sent me a goofy video about teaching kids the Dewey Decimal Classification (DDC) system. It dawned on me that I knew the system, but I knew nothing about its inventor.

So that one video sent me down the proverbial “research rabbit hole,” beginning with an Internet search, then Wayne Wiegand’s book, Irrepressible Reformer: A Biography of Melvil Dewey, and on from there.

Q: What do you think are some of the most common perceptions and misperceptions about the Dewey Decimal System?

A: When I began writing this book, all I knew was that the DDC call numbers made it easy for me to find books quickly and efficiently when I visited public libraries across the country and abroad. I was surprised to find the DDC has been challenged throughout the years, with much debate about its inclusiveness and adaptability. 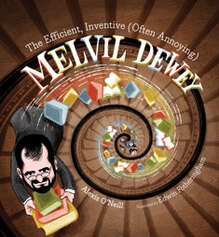 Although the creation of the DDC in 1876 was revolutionary, the classes, divisions, and sections that Dewey defined reflected his prejudices and those of the society in which he lived. For example, “pregnancy” was once classified under the heading of disease, and “homosexuality” under social problems or medical disorders.

Also, in the 200s heading of Religion, his original system favored Christian religions and left little room for others. But the DDC has evolved over time and is constantly being updated. Editors consult with experts and the public to make reclassifications, and since 2011 updates are posted online biweekly, as opposed to every six years.

A: My research was a combination of primary and secondary sources, and visiting sites such as Amherst College and Albany, New York, where Dewey worked. I also read lots of contemporary discussions of the man and his work and the controversies surrounding him.

After gathering the research, I felt that young readers could connect with elements of Dewey’s story in a variety of ways: 1) Most kids are familiar with the DDC through their school and public libraries. 2) Kids often form strong interests at a young age that carry through to adulthood much like Dewey’s interests in books, organization, and the decimal system did for him. 3) Simplified spelling that Dewey promoted has contemporary echoes in the texting that kids do on their cell phones. 4) Some kids might identify with Dewey’s obsession with efficiency and apparent compulsion to place things in order or his difficulty in listening to or communicating effectively with others.

The first was discovering how inventive Dewey was. From little things such as making a pencil that was red on one end, blue on the other (which I used as a teacher for years) to big things such as creating the country’s first library school.

The second was learning about his extreme prejudices against Jews and people of other religious and racial groups, and his sexual harassment of women, for which he was stripped of his positions and his reputation.

I was also surprised that he was raised in Adams Center, New York, not far from where I used to live in Syracuse, and that his family lived for a time in Oneida, where I once was a teacher. In all the years I lived there, I hadn’t heard his name mentioned in connection to the city.

A: I love what Ed created! He captured the energy and speed of Dewey in his lively illustrations. I especially get a kick out of his visual inventiveness -- such as having books form his hair and beard on the title page, depicting Dewey as a seemingly unstoppable train, and representing Dewey’s two-sidedness as almost a comedy/tragedy mask.

And the cover, showing Dewey running up a spiral staircase, expresses his tightly-wound personality perfectly.

A: I’m working on a long-form middle grade nonfiction book, a couple of picture books, and am trying to hit the right note with a middle grade novel.

A: Dewey was his own worst enemy. His egocentric attitudes and actions sent him in a downward spiral in terms of his career and reputation. I think he felt that he could talk his way out of anything if he talked fast enough and long enough. But he was wrong.

There are some people today who wish that Dewey’s name could be erased from the planet. (As an academic librarian on Twitter wrote in reference to my book without having read it, “I'm not sure how you would look at the history of Melvil Dewey and think that's someone children should be reading about in the year 2020.”)

However, I believe that while young readers will appreciate his contributions, they also deserve to know that no matter how big and positive a reputation in libraries Dewey had, his reprehensible actions toward minorities and women cost him not only his positions but his enduring reputation. He was a complicated person worth learning about.