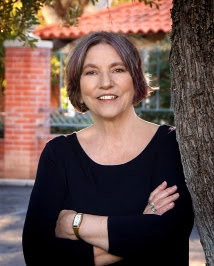 Dianne Ebertt Beeaff is the author of the new story collection On Tràigh Lar Beach. Her other books include A Grand Madness: U2 Twenty Years After. She lives in Tucson, Arizona.

Q: How did you come up with the concept for these stories, which focus on objects washed up on a beach in Scotland?

A: Thank you so much for this opportunity, Deborah.

Many years ago, I had the privilege of a couple of two-week stays on the Isle of Harris in the Outer Hebrides of Scotland. We stayed in a tiny hamlet called Rodel, just down the road from Tràigh Lar Beach. The Hebrides are magical, remote, and stunningly beautiful. White beaches and breakers, misted mountains, and wild-weather summer days.

Walking on Tràigh Lar Beach on our way to the MacLeod Stone on a high hill behind the strand, I noticed several motley items tangled in the seaweed, and noted in my journal the seed of a short story collection which might even bring some attention to the issue of ocean pollution. 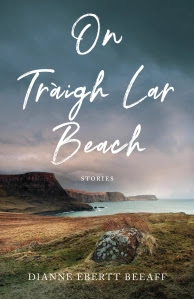 Years passed, and as I finished up the sequel to a 2000 memoir, I began putting together those stories for a collection. I’m a slow writer, and while simultaneously completing the memoir, which was released in the fall of 2019, I continued with the collection. The first story, Erica, is taken almost verbatim from my journal, with the unfortunate exception that I don’t have a two-book contract!

Q: The book also includes a novella written by one of your characters. What was it like to write this book within a book?

A: I loved writing On Tràigh Lar Beach as a whole, and I’m partial to writing in the first person. So it was particularly satisfying to write the novella. I’ve always tried to be empathetic in both my personal and professional lives and it’s always a privilege of sorts to get into other people’s heads, even if they are my own fictional creations. So it was great fun.

Q: You’ve written fiction and nonfiction—is your writing process similar, and do you have a preference?

A: Many years ago, when I was working professionally in magazine journalism, I met an agent who was speaking about pitches at a writer’s conference. Each participant in her session was asked about their writing experience, if any, and the project they were pitching.

I said that I was currently working in nonfiction journalism, but that my project was an historical fiction novel. The agent was fairly horrified. She’d hoped that I’d have presented something nonfiction, as that was where my expertise lay in her view.

I didn’t agree with her then and feel even more strongly about this issue now. Fiction and nonfiction feed off each other’s strengths, fiction so often dependent on fact-and-figure research, a cornerstone of nonfiction; nonfiction incorporating the dialogue, description and narrative story line of nonfiction.

I see no conflict to working in both areas and have no real preference. Whatever the story I want to tell calls for, my process is similar in both fields. A first draft is the hardest part of any writing to me, whether fiction or nonfiction.

Another Scottish experience illustrates the false dichotomy of fiction and nonfiction perfectly for me.

Years ago, I visited the Orkneys and the Shetlands, Scottish island chains off the northeast coast of the mainland. Islanders of the nearer Orkneys consider themselves farmers who fish. The Shetlanders, further out to sea, think of themselves as fishermen who farm. (Neither of them self-identify as Scottish, but that’s another story.)

As a writer who works in both nonfiction and fiction, I approach my work exactly the same way.

A: My object always, in writing fiction particularly, is to tell a good story well, and I hope readers will feel they’ve been a witness of sorts to some intriguing lives. As a possible aside, they might even bring their attention to one of the urgent environmental issues of our day—the pollution of our oceans.

A: I’m currently putting together a second collection of stories, this one based in Arizona. I also have a third memoir in the works, a natural history account of the cottage my father built on 16 acres along the Conestoga River in Southern Ontario, Canada, in the 1950s.