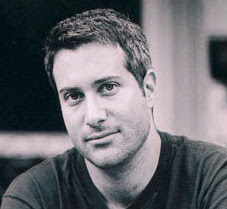 Darin Strauss is the author of the new novel The Queen of Tuesday: A Lucille Ball Story. His other books include Half a Life. He teaches writing at New York University, and he lives in Brooklyn.

Q: How did you come up with the idea for The Queen of Tuesday?

A: A kind of nightmare. I woke up one 3 a.m. with a start: I’d dreamed something dramatic, scribbled it down, and thought: “This will be my next book!” I woke up the next morning and scrambled to see what I’d written: “Lucille Ball.” That was it.

I began doing research, anyway; I found that my grandfather had attended a party with her—a party thrown by Donald Trump’s father, of all people. A party where Trump Sr., in the name of ugly modernity, destroyed a representation of what had been dignified and special about old-time America. What a perfect real-life metaphor! 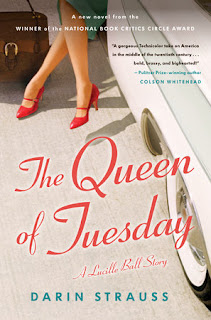 Somewhere in my addled noggin, I must have kept that information -- grandpa met Lucille Ball! -- and, the truth was, I’d always had questions about him. About the infidelity he committed around the time of that party.

With all these elements swirling together, I knew that’d be my next book.

Q: In a Washington Post review, Ron Charles writes, "The Queen of Tuesday is a striking exploration of how fame confounds the lives of prominent and obscure people." What do you think of that description?

A: I love it. That was one of the things I was trying to examine. What fame does to people -- to the famous, and those around the famous.

I was friendly with both Philip Seymour Hoffman and Carrie Fisher. I saw how fame affected them, and a) in Carrie's case, how it changed me around her. And b) in Philip's case, how it changed his friends. Many of his pals were struggling actors, and, seeing the way their behavior toward him mutated as he went from one of them to Oscar-winning movie star, I realized that fame warps everyone.

And it's such a big force in this country -- an under-examined force, I think.

Q: What did you see as the right blend of history and fiction as you wrote the book?

A: I studied with E.L. Doctorow, at NYU -- where I now teach, humorously enough. And Doctorow said that, when one is writing a novel, one should do the least amount of research one can get away with. If you do too much research (the thinking goes), it will read like a textbook.

So, I think it's a balance. The "what you can get away with" is a key part of the equation: too little, and you'll lose the reader. I did a lot of research, but, as novelist, my responsibility is to tell a good story more than anything else. I think that's what Doctorow was getting at.

In this book, the idea was to try to fill it with as many elements -- as much fun stuff -- as I could. A woman in love. Celebrity. Media. Glamour -- and set it in a period we can't turn from: The glitzy 50s, New York and LA, dream-towns at their dreaming best.

Q: What do you see as Lucille Ball's legacy today?

A: The more research I did about Lucille Ball, the more I came not only to admire her, but to realize what a pivotal figure she was in American culture.

Not just the most popular TV star ever -- though she was that -- but a kind of proto-feminist icon. She greenlit Star Trek, for example. Without her, no modern sci-fi: because Star Trek paved the way for Star Wars, which paved the way for everything.

Hers seemed a story that needed to be told now—the first American woman to be a powerful Hollywood executive; the wife in the first truly famous and beloved interracial marriage in American history. Plus, she was there for the birth of TV—and, as we’re now living in the age of Peak TV, this book shows how TV got here. The Queen of Tuesday was a way for me to shed a light on these under-discussed details.

Another novel, and a screenplay for Half a Life, my memoir.

A: I play a mean guitar.