Kenneth C. Davis is the author of the new young adult book Strongman: The Rise of Five Dictators and the Fall of Democracy. His many other books include Don't Know Much About History. He lives in New York City.

Q: Why did you decide to focus on dictators in your new book?

A: I chose this subject for a simple reason. After many years of writing about history, I found myself more concerned than ever before about the fate of democracy. Like many people, I believed that democracy was permanent. I thought democracy would continue to flourish over time and spread, especially after the downfall of the Soviet Union. But I saw the creep of authoritarianism around the world in recent years.

And at home, I saw a sustained assault on basic American ideals —in voter suppression, Supreme Court decisions that hurt voting rights and campaign financing, and the demise of meaningful political compromise. I wanted to focus attention on how quickly we can lose democracy by writing about how ruthless dictators rise and come to power.

Q: How did you choose the five people to include? 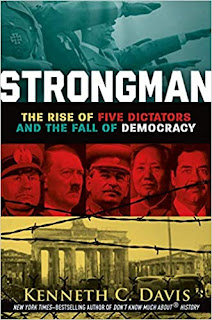 A: Of course, there is a long list of very ruthless people I could have included. I chose these five because they are among the most murderous dictators in history. Mussolini, Hitler, Stalin, and Mao were all obvious choices because of the sheer numbers of people they murdered and destroyed— in the tens of millions — and their impact on modern history.

I chose to include Saddam for two reasons— first, there is a direct link between Stalin and Saddam, who studied the Soviet dictator and his techniques. And second, I felt that Saddam was the Strongman whose history was most closely connected to America’s recent history. The U.S. went to war twice against him. That set him apart. I wanted to include him in that context.

Q: How would you define a strongman?

A: It’s fairly simple. A Strongman is an authoritarian leader — a dictator, a tyrant — who will use any means to gain power and then cement that power, largely for personal use. The Strongman does this without regard for life, or any of the freedoms and rights that far too many of us take for granted.

Some key characteristics of the Strongman are  a powerful embrace of nationalism; scapegoating an opponent or perceived enemy;  calling for law and order; capitalizing on a crisis or manufacturing one.  And then using propaganda, attacking democratic institutions and the free press, demanding loyalty, eliminating opposition, and creating a cult of personality.

These are all part of what I call the “Strongman's Playbook” outlined in my book.

Q: You write that democracy "can be very fragile. Democracy can die quickly." What dangers do you see for our democracy today?

A: Let me start with the stories of Mussolini and Hitler because they are perfect examples of how democracy dies in broad daylight, with crowds cheering. Both men came to power legally in countries with democracy and constitutions. They quickly used legal authority to destroy democracy in their countries.

It happened quickly and with very little resistance from the public. People in Italy and Germany saw these Strongmen as forceful leaders who would take their country out of crisis. They both used violence and lawlessness to take complete control of their countries. The result, of course, was disastrous for both their people and the rest of the world.

Today democracy is under assault across the globe. More importantly, to me, democracy is threatened in the United States in ways it hasn't been since the Civil War. Gerrymandering, voter suppression, court rulings that have unleashed a tidal wave of money washing over politics.

All of this has to be combined with the double-edged sword of the Internet and social media —in our "Information Age," the control of information is power. But false information, lies, and propaganda are spread as easily and widely as truth and facts —on everything from pop stars to politics and vital health information on subjects like vaccines.

When I wrote my book, I was crafting a work of history, not a reflection of current politics. Nowhere did I mention the current president. But The New York Times recently called his campaign for reelection the “greatest threat to American democracy since World War II.” That is a stunning statement. I do not think it's an exaggeration.

A: I hope to shine a light on two central lessons. First, democracy is fragile. It is not permanent. It can disappear in broad daylight and it can disappear quickly. That should frighten us all. Second, If we care about democracy and our rights and our freedoms, then we have to make a choice. Do we speak out for democracy? Do we defend democracy? Are you a collaborator or an “upstander"?

The unfortunate history I’ve told in this book is that collaborators were plentiful and upstanders were rare. But  there were also many bystanders who went along, thinking they were untouched by events. In that, they were tragically mistaken.

A: I always have new projects in various stages of thinking and researching. But right now, I am focused on one goal: making sure people understand history —specifically these stories of dictators. And that we don’t remain a nation of historical illiterates. It may be the most important thing I can do.

That is one reason I have been spending so much time working with teachers and speaking directly to students about the importance of history and its lessons — whether that lesson is about the role of slavery in America’s past, which I wrote about in In the Shadow of Liberty; or the lessons of a pandemic, the subject of More Deadly Than War; or the crisis in democracy we are living through right now, the reason for Strongman.

A: I’ve also been a student for the last couple of years. My wife and I attend  a branch of the City University of New York to keep our minds fresh and engaged.

A few semesters ago, a fellow student said in class that there was no reason to vote because of the Electoral College. This very bright young woman said, “My vote doesn’t matter.” I was very troubled by that. I always believed that voting was a nearly sacred right and responsibility. That anyone dismisses that idea is sad and dangerous.

But it is about more than voting. More than ever, I am convinced not only that your vote matters but that your voice matters, even if you are too young to cast a ballot. When I was a teenager, I couldn’t vote but we walked out of school to protest the Vietnam War in the “Moratorium.”

One of my personal heroes is the late John Lewis. When he was 18,  he couldn’t vote because at the time the voting age was 21. But he spoke out and he marched and he protested the great obstacles to voting facing so many Black Americans. He spoke of  “Good Trouble” and he helped bring about change.

Young people throughout our history have used their voices even when they couldn’t vote. That’s an important lesson from the past for all of us.