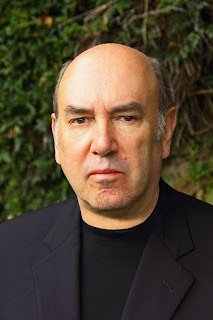 Robert Duncan is the author of the new novel Loudmouth. His other books include The Noise and Only the Good Die Young. A singer, songwriter, record producer, journalist, and founder of an ad and design agency, he lives in Fairfax, California.

Q: How much are your character Thomas Ransom's experiences based on your own experience in music and music journalism?

A: It’s like the guy’s a stalker. I worked at Creem, becoming managing editor at 22, and so did Thomas Ransom. I was an outrageous rock singer, soon blackballed by the music business, and so was Thomas. I rebelled against a hidebound Southern family, transplanted to New York City, and so does Thomas. I married a dizzingly bohemian artist and photographer, so did Thomas.

Like most debut novels, there’s a lot of non- in Loudmouth’s fiction. But it’s still not an autobiography or memoir. And if only part of it is fact, all of it is the truth — perhaps the deeper truth, arrived at by reimagining a life at slightly different times and places, in a slightly different order, with slightly different characters, blurring the physical reality to bring the metaphysical into slightly sharper focus.

Q: The Publishers Weekly review of the book says of Thomas's interactions with Bruce Springsteen: "Duncan handles Tom’s navigation of his relationship to the star as subject, not friend, with intelligence and grace." How would you describe the dynamic between Tom and Springsteen — as well as the other musicians who appear in the novel?

A: “I didn’t trust those kinds of relationships” is something Thomas says early on about becoming friends with Bruce. But that surface paranoia, the knee-jerk rejection, masks an inescapable yearning. 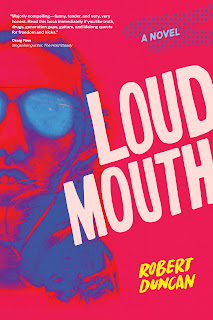 In real life, Bruce and I hit it off right away. I liked him. I think he liked me. He even invited me to visit him at the Jersey Shore. Pretty sure that, if not for his burgeoning fame, we might have become buds. But I didn’t want to be seen, by him or anyone, as some kind of sycophant, as yes-man or leech. I didn’t want to see myself that way.

At the same time, who could ignore the adulation beginning to envelop Bruce Springsteen? How could anyone pretend it’s nothing, not there, especially when, to an irreducible regular guy like me, like Thomas Ransom — who started out wanting to be a rock star, trying to be a rock star — it was still so damn fascinating?

Sure, every friendship has its transactional aspect — we’re all looking for something from one another, even if it’s love. But when does it go from healthy symbiosis to exploitation? And there was another issue here, or maybe another excuse: journalists aren’t supposed to be friends with their subjects. Affection might compromise the reporting.

In any case, like my protagonist, I was too insecure, and probably too jealous, to find my way past all that, at least with Bruce. Today I have a few rock star friends, but being a rock star is not what it used to be, and perhaps neither am I.

Q: You include epigraphs at the start of the book from Nick Tosches and Walt Whitman. Why did you choose those particular quotes?

A: “The deeper we seek, the more we descend from knowledge to mystery, which is the only place where true wisdom abides.” That’s from the Tosches book Where Dead Voices Gather and touches on my lifelong sense, as explored in Loudmouth (and in question #1), that deeper truth and more profound revelation lies beyond knowing, beyond the rational, beyond fact and measure.

And as I was finishing the book, came news that Nick had passed away. Early in my career, we’d been friends and occasional drinking buddies, and I liked the idea of offering a tribute.

I also thought it was cheeky to invoke another rock critic, especially one who’d so thoroughly transcended the designation. And just as Nick’s book is an examination of the wild twists of popular culture, mine is about the wild twists of a life within that culture.

As to the Whitman epigraph, I liked juxtaposing the rock critic’s high-minded line with a low-minded one from the founding father* of American poetry: “Unscrew the doors themselves from their jambs!” It even struck me that this exhortation represented our poetry Daddio going on to invent rock ‘n’ roll, nearly a century before Little Richard played note one.

A: I hope readers think it’s funny, sad, surprising and maybe, in parts, lovely. I hope they enjoy the words, sentences, and paragraphs, the rhythms and music, as much as the characters and scenes. I hope they pick up on some of what’s going on between the lines and among the lines, the wordplay, inside jokes, compulsive allusions to songs, bands and pop culture.

Ultimately, I hope it gives the reader a fresh glimpse of the wondrous/disastrous complexity of life.

A: Two things. One, a book called Center of the Universe. At the moment, it’s a long piece about the strange, small town I live in and the Italian restaurant, owned and operated by two Korean-Brazilian sisters, at its heart.

It’s about love, family, faith, exile and, again, that wondrous/disastrous complexity of life — for instance, how a soft-spoken North Korean POW-turned-preacher ends up in Fairfax, California, side by side with a loud, profane atheist, 25 years his junior, from New York City. I wrote it as a serial, a blog of sorts, but always meant it to be a book.

My other overambitious endeavor is a novel, called Fifty-Nine Burst, about the avant-garde art scene in Los Angeles in the late ‘50s, early ‘60s, and how it overlapped with the avant-garde aeronautics scene, the hellbent rocketeers out in the Arroyo Seco. It’s a story about audacity, brilliance, breathtaking promise, and the inevitable descent into banality. What goes up, in other words, must come down.

A: On my fourth grade report card, the homeroom teacher wrote in the Conduct section: “Robert acts silly much of the time and gets carried away with the other boys.” Even this many decades later, that curt assessment probably says everything you’d want to know about me — so much so that I’ve instructed my children to chisel it into whatever rock they stuff me under.