Carol Allen is the author of the new children's book A Long Way from the Strawberry Patch: The Life of Leah Chase. It focuses on the late Leah Chase, chef, restaurant owner, and civic leader in New Orleans, who worked with Allen on the book until Chase's death in 2019. Allen is based in New Orleans.

Q: Why did you and Leah Chase decide to write this new book for children about her life?

A: I wrote Leah Chase’s biography, published by Pelican in 2002, and spent about three years getting to know her and her family. Several years ago my agent asked me to write a children’s book about Leah. She suggested I read Bring Me Some Apples and I’ll Bake You a Pie, the story of Edna Lewis.

I liked the book but I knew I could not write something similar about Leah; it did not interest me. However, I spoke with Leah and we decided to work on something for children. Leah was in her 80s then. I spent quite a bit of time on the story, and at some point put it aside and forgot about it. (I have NO idea why, except I was going through a difficult divorce at the time. Maybe I just felt overwhelmed.)

Anyway, almost six years later I revived that manuscript and that made me want to revisit the idea. By then, Leah was in her 90s and her children were taking more and more responsibility in making decisions for their mother, decisions a younger Leah Chase would have made for herself, on the spot!

I spoke to Pelican AND Leah’s children about my desire to write her biography for young readers. Everyone agreed. My reason was to get her story “out there,” especially for young girls. Leah’s life was a beacon of hope, a lesson in living life to its fullest... motivational, an inspiration. She truly believed what she often said: “If I can do this, maybe you can do it better!” 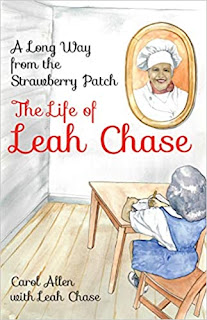 Q: Why did you write the book in the form of letters to God?

A: Well, THAT’S a story! I was writing in standard chapter book format and one morning, reading everything I had written, decided I was writing the most boring thing I ever read! It wouldn’t motivate anybody.

I set aside my computer, poured over, yet again, my notebook of handwritten notes organized by topics and dates, studied again my original, old manuscript, and prayed. (Yes, I am a “pray’er”.) I liked the beginning of my original manuscript, and that became the prologue of the book. I honestly cannot remember precisely how the first letter to God happened, but it did, and it just seemed to work. So off I went!

And in retrospect, this format was Leah. Leah spoke with God all the time. She had crucifixes on the walls of her kitchen and rosaries in her pockets. She told me once that there wasn’t a single day of her life that she did not talk with God.

Ernie Gaines taught me, “Write with fire, edit with ice.” I was writing with fire.

Q: How did you and Leah Chase work together on the book?

A: Having written her biography, I already had an abundance of material, and I had promised Leah’s children I would not need much of her time to get the rest of the material I needed. I interviewed her several times, concentrating more on her childhood. I did all of the writing, but she and her children read everything I wrote. And Devinn, my editor, made everything so much better. She is brilliant.

Q: What do you hope kids take away from this book?

A: Hope. Determination. A belief in the importance of caring for others. Succinctly put, if more people were like Leah Chase, the world would be SUCH a much better place.

A: Pelican has my YA historical novel, Fever, and I’m dabbling with something I titled Good Self/Bad Self, but I haven’t found my way with it yet.

A: Yes. When it was clear to me the “letters to God” format was what I wanted to do, I became nervous about “imitating” Judy Blume and Are You There God? It’s Me, Margaret. I wrote to one of my former professors at Vermont College and asked her for an opinion, and she wrote back something like “Judy Blume doesn’t own the copyright on writing letters to God. Go for it.” And I did!

And finally, I think this is a TEACHABLE book, but it’s not necessarily a children’s book. Several of the people who wrote blurbs said they thought it was a book for all ages. I agree, especially here in the Greater New Orleans area where Leah Chase was so well known, loved and respected. I know of one school that plans to use the book in a unit for middle grade girls later this year. I guess that will be the test.