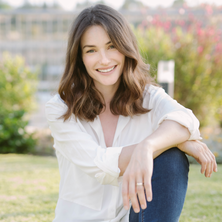 Michelle Adams is the author of the new novel Little Wishes. She also has written the novels Between the Lies and If You Knew My Sister. She grew up in the UK and lives in Cyprus.

Q: How did you come up with the idea for Little Wishes, and for your character Elizabeth?

A: I had been thinking about writing a love story for some time, but I was in the middle of a contract for two psychological thrillers. I broached the subject with my agent, and she was enthusiastic about the idea, so in the downtime between books I began writing the initial story.

The first chapter I ever wrote was when Tom and Elizabeth first attend the hospital for his diagnosis, and it was based on my own experience of accompanying my father to such an appointment.

As for Elizabeth, after writing that first chapter, I went back to think about who that girl might have been when she was younger, and what might have kept two people who love each other, apart. 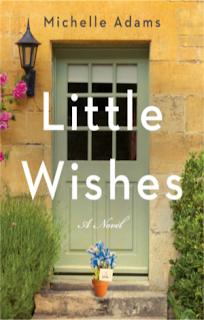 I love Cornwall, and knew I wanted to set the book in a small coastal village there, so I began building her life, and factoring in the sort of exposures she would have experienced, and the kind of restrictions that might have been placed on such a girl back in 1960s England.

A: I knew how the novel would end because I was inspired to write it because of my own experience of losing a parent to cancer. But along the way, lots of the steps to reach that final destination were changing, and some important chapters, like when Tom and Elizabeth have dinner on the boat as they sail up the Thames river in London, were late additions.

For all of my books, in hindsight, the most important elements are always those that come late on in the writing process. But I always knew that Elizabeth would return home with Tom’s ashes and scatter them as she did.

A: I really hope that in reading Little Wishes people consider how it is never too late to chase something that you want. Perhaps that’s love, lost family members, or even an education.

The wishes in the novel relate to Tom and Elizabeth’s life, but I think in some way they belong to all of us. We all have moments in the past when we have wished for something, and then done nothing about making it come true. This novel is about realizing that you have time to do the things you want to do, and achieve the things you want to achieve.

A: I have quite a few novels that I consider my favourites. In no particular order they are A Little Life, Captain Corelli’s Mandolin, and The Secret History. This year I have added three more to my little list, which include Normal People, Where the Crawdads Sing, and My Dark Vanessa.

A: Right now I have just finished the final edit of my next book before it goes to my editor.

Plus, I have two more projects that I’m working on. I have one love story, which I am tentatively calling Broken Promises which I have written four times and am just about happy with it.

Plus, I am working on an experimental thriller, which has a structure I have never used before, and is proving a welcome challenge. The subject matter is quite dark, which is how I prefer my thrillers, so we’ll see how that pans out.

A: About me? I love to run, and was previously training for a marathon until I ruptured my hip ligament. I also love to bake, and did far too much of it during lockdown. I love cats, and have two, one of which is practically feral, and the other is the sweetest cat you could ever wish for.

When I’m not reading, you’ll hopefully find me in the mountains, but that could be about to change as I’m about to start a post grad in psychology. Like I said earlier, it’s never too late to do something you want to do.