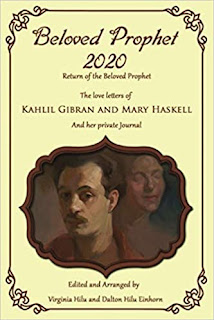 Dalton Hilu Einhorn is the editor of the new book Beloved Prophet 2020. It is a revision of the work his mother, Virginia Hilu, edited in the 1970s, focusing on the relationship between Kahlil Gibran (author of The Prophet) and Mary Haskell.

Q: You write, "Every child is the unfinished business of their parents." Why did you decide to revise your mother's work on this project?

A: There’s a very long backstory that relates to the unfinished business. Part of the motivation for me is that this was the project that brought closure to the wound of my mother’s death when I was very young. I wanted your readers to understand to what the unfished business referred.

The main reason I chose to revise Beloved Prophet and take it down from 450 pages to about three-fifths of the original length was to make it more readable for the average person who likes Kahlil Gibran and doesn’t know about this remarkable, charming relationship with Mary Elizabeth Haskell.

My sense is that people new to the story are shocked to know there was a 27-year relationship between the two of them and that she was, in reality, as much a co-creator of The Prophet as she was his dear friend and ardent enthusiast.

The 1972 version my mother did told the story of their relationship, but it gave up readability for proof of this relationship, which no one knew about when the book came out.

I agree with her decision at the time that a longer book would overcome skepticism that Mary had that level of importance in Kahlil’s life. Mary and Kahlil spent thousands of hours together over the years, and there was a lot of content from which to choose.

Luckily, the world now accepts Mary’s role in his life, so we now can simply jump to the charming relationship rather than need to introduce Mary to the world.

Q: What changes did you make in creating this edition of the book?

A: I added nothing to the book other than my own brief introduction.

The main change is reduction without losing what I thought was the charm of the secret love affair, and the opportunity to go into a time machine back to the years of World War I and afterwards and be a fly on the wall as they grew together. Coming back to 2020 is rough!

If you compare the two books, you’ll see that eight or 10 letters from Mary to Kahlil telling him how he was special and a brilliant artist got reduced to one. Some of the entries in which Kahlil talks with Mary about his childhood and explains he can talk to her like no one else in his life got trimmed substantially.

I thought the repetition proved they spent time together and adored each other, but it came at the cost of the reader needing to endure a lot of time between exciting parts.

The second editorial decision was to remove a lot of their gossip about contemporaries, and also to take out the many pages in which they discussed whether or not they should have sex. My mother was a big gossip and mischief-maker, and she loved the sex talk. I find it hilarious that my mother put all of that in her book, but I decided that my version would be a little more G-rated, so out went the dirty stuff.

A: I think the great appeal of this book is the aspiration to take the risk of finding love.

People in 2020 seem terrifyingly angry and divisive. I’ve heard of people who won’t date others of the wrong political views, for example. People seem thin-skinned and respond with knee-jerk judgment and anger. People are building walls all around them and shutting out others, perhaps surviving on digital relationships.

I’m a romantic. When I see the bad behaviors of today, I see people who will never experience love. At the heart of love is risk and selflessness and feeling that another person makes you more than who you are now. Imagine today someone giving themselves to love and being ready to change for the other person?

My hope is that people are going to reject the notions that keep us apart, and the unfulfilling nature of swiping right or left. The more unloving our society gets, the more I believe people will want to the kind of love that requires risk-taking and change and means heartache and rejection and having your feelings hurt.

This is a whole book about how beautifully that worked out for Mary and Kahlil, and the world.

Plus, in a world of texts and emojis and under 140 characters, these were two people who wrote beautifully and spoke eloquently. No one today writes like they did. Even short notes between them were dense with love and meaning.

Their words meant everything. I think the best selection in the book is Mary’s letter to Kahlil after she received her copy of The Prophet. I think it is the most loving letter written in the 20th century, though I haven’t read too many love letters!

At a minimum, wouldn’t it be great to get out of 2020 for a while and join Kahlil and Mary for a conversation while strolling down Fifth Avenue in New York City in 1920?

Q: What do you see as Kahlil Gibran's legacy today?

A: I’m a neophyte when it comes to contextualizing Gibran’s legacy. Scholars still write about the lasting impact he made on Middle Eastern literature and art, and he remains a beloved son of Lebanon.

My perspective is probably more of simple awe and admiration. The Prophet sold more copies than did any other book in the 20th century. Millions of lives were affected positively by his writings. I see no reason why millions more will not be.

The Prophet will always sound fresh and I imagine a hundred years from now people will feel as if that book was written just for them. I find that possibility, or should I say probability, sweet.

And I just realized that Beloved Prophet 2020 has its copyright expire in 2068. I wonder if I will be around to see that and hear what people think about Kahlil Gibran then. I’m pretty excited to know what the new generations of readers will have to say about what Kahlil called his “curious little book.”

A: Beloved Prophet 2020 is the middle book in a trilogy, if you will.

When I gained permissions from the estates of Mary and Kahlil to bring back my mother’s book, I also received authorization to use other materials from the nearly 10,000 pages my mother never used.

I found a collection of unpublished poems and sayings that Kahlil was working on at the time of his death with a note indicating they were being prepared for a short book. I edited those never-published writings and they were published earlier this year in a book called, And the Prophet Said (Red Wheel Publishing).

Now I’m focused on my next Gibran book. If my mother’s 450-page book seemed too long, you can imagine how it felt when I read the other few thousand pages in the files at University of North Carolina.

It might sound funny, but when I read those materials, I was looking out for what my mother didn’t use.

I thought she picked the best, but what she didn’t use stunned me. I’ve just finished my first draft of a book that tells the story of the creation of The Prophet in the words of Mary and Kahlil. My mother used nearly none of the letters and journals that tell how that book came together, and the story is in there. And it reads like a screenplay and it ends with a line that will be a tearjerker.

If I can’t find a publisher, I will self-publish that in time for the centennial anniversary of The Prophet.

A: I have been to the University of North Carolina a few times and read thousands of pages in the handwriting of Mary and Kahlil. I have become very protective of them, as an aside.

One of the cool experiences was sitting in an old library in a big building at UNC, with the dark wood paneling and the tall bookshelves, and the hush of a university where it seems like a lot of important stuff is going on. And I’ve held what they wrote, and what my mother held in her own hands.

There were a lot of times it was pretty emotional when I realized what was going on.

One last thing. My experience with Gibran’s works, including The Madman and The Forerunner is that I feel like he wrote them for me.

My book website is www.BelovedProphet2020.com, and a friend of mine, Peter Youngblood Hills, who is an actor in London, made some recordings of his readings of some of the entries. It’s funny to hear someone else read them. I told him that my ears saw what my eyes didn’t hear when I played the recordings.