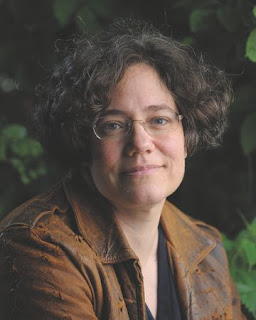 Elizabeth Wein is the author of the new young adult historical novel The Enigma Game. Her many other books include Code Name Verity and The Pearl Thief. She lives in Scotland.

Hello Deborah, it’s a delight to be a guest on your blog again! You are such a wonderful supporter and it’s extremely kind of you to take the time to interview me. I don’t know how you manage to keep your busy schedule balanced and I always enjoy your questions!

Q: Thanks so much—it’s always great to host you on the blog!

How did you come up with the idea for your new novel, The Enigma Game?

A: The original spark came in 2014, when I was lucky enough to take a flight in a World War II era Lancaster bomber, one of only two such aircraft still flying today.

After our flight, the pilot told me a story about being in a pub in England where the beam above the bar was studded with old coins. When he’d reached up to try to pull one out and take a look, the bartender told him, “Don’t touch those. That’s dead men’s money.”

The coins had been placed there by wartime pilots before missions – if they came back alive, they’d pull out their coins and buy a drink. If they didn’t come back, the coins stayed there – and many of them are still there to this day.

I didn’t write The Enigma Game for another few years, but I knew I wanted to tell a story about the pilots who left those coins in the pub. 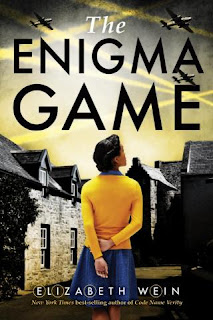 The other thing I really wanted to write about was the relationship between a young person and an old person! That’s how I got the idea for Louisa Adair, who narrates about half the book, and Jane Warner, the old woman Louisa is hired to care for.

Throw in an Enigma machine and some code that needs breaking, and the plot for The Enigma Game began to take shape, as I gave Louisa and Jane the opportunity to translate mysterious messages for the bomber squadron that was leaving their coins in the bar.

Q: On your website, the book is listed as part of the “Code Name Verity World.” How do you see those novels connecting to one another, and can you read them independently?

A: Every one of the novels in the “Code Name Verity World” can be read independently – they are very much stand-alones, completely separate stories that have their own sets of characters (Code Name Verity and The Pearl Thief share a narrator, but all the others have completely different narrators, too).

My real reason for re-visiting this world is that I keep making up backstory for it, and then I really want to write that!

It seemed silly to make up an entirely new flight squadron to write about in The Enigma Game when I knew, because it is mentioned in Code Name Verity, that Jamie from that book had been flying Bristol Blenheim bomber aircraft earlier in the war. It seemed very natural to give some of the narrative to him, and to use this book to explore his own wartime adventures.

For me, it’s a bit like being a tourist obsessed with one particular place. I keep going back because I haven’t seen all the sights yet, and there always seems to be something I’ve missed! But I don’t need to visit the castle and the beach and the museum on the same visit, or in any particular order, to enjoy them!

Q: How did you research this new book, and what did you learn that especially surprised you?

A: I wish I could tell you that I did all kinds of exciting travel and interviews, but mostly I just read. I read about British alien internment camps and about Caribbean men and women in service in the United Kingdom in World War II, and about German Luftwaffe pilots who defected to Britain, and about Royal Air Force airmen who were shot down while flying Bristol Bomber aircraft.

There were some wonderful hands-on moments, though. I went to a lecture by an Enigma machine expert and got to actually see how it works and to press the keys of a real wartime German coding machine.

I visited the aviation museum at RAF Hendon, in London, and poked my head into the cockpit of a restored Bristol Blenheim aircraft. I learned Morse code! It was a really interesting exercise and I’m glad I did it – I think it gave me a much greater appreciation of the difficulties and pitfalls you might encounter while both using and mastering it.

And I flew up and down the Aberdeenshire coast and out over the North Sea to get a feel for the view from the cockpit, and also to get an overhead view of the site where my imaginary wartime airfield is based.

Q: The Kirkus Review of the book says it raises “questions still relevant today, particularly around class and race, nationality and belonging.” What do you think of that assessment?

A: I was really thrilled that they said this. One of my chief aims in writing historical fiction is to hold a mirror to the present – to help readers recognize themselves in the people who went before us. I also want very much for readers to relate to my characters and their situations – I want my books to feel alive and relevant to today’s young people.

“That which is has already been, And what is to be has already been; And God requires an account of what is past.” This quotation from Ecclesiastes is a good mantra for me. We can learn about ourselves from the past.

That review also called The Enigma Game “a novel thematically focused on the ways individuals matter,” and this might be the most wonderful thing anyone’s ever said in a review of one of my books. When I read that line, I’d just finished an obsessive double-read of For Whom the Bell Tolls, and I was absolutely thrilled that the reviewer picked up on that theme in my own book.

I hadn’t really put it in there on purpose, but it is something I feel strongly about – taking responsibility for our own actions – and knowing that we can each make a difference, no matter how unimportant we may feel.

Particularly in 2020, when our individual votes and our individual adherence to lockdown and social distancing rules are so important, I love that I can give readers something like a pattern to follow – or at least to think about!

A: I’m always working on several different projects! I’m currently writing a novel that involves flying around Europe in the 1930s; I’ve just finished another short novel about a young glider pilot for Barrington Stoke, a dyslexic-friendly publisher here in Scotland; and in the long term I’m working on another nonfiction project about aviation.

A: Please stop in on any of my virtual book tour events coming up during the first week of November 2020, when The Enigma Game is released! Details and links are on my website at https://www.elizabethwein.com/news.

And very best wishes for your own Thomas Jefferson and the Return of the Magic Hat!