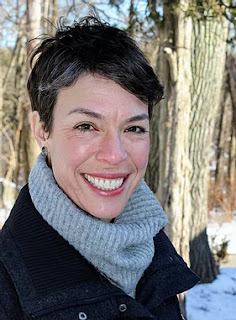 Casey Breton is the author of Going Rogue (at Hebrew School), a new middle grade novel for kids. It features a boy who thinks his Hebrew school teacher might be a Jedi master. Breton, a former elementary school teacher, lives in Gloucester, Massachusetts.

Q: You write that you came up with the idea for Going Rogue after trying to answer your kids' questions about why they had to go to Hebrew school. How did you come up with the Star Wars connection?

A: The Star Wars connection also came from my kids, who are big fans. They didn’t connect Star Wars to Judaism, of course, but I think I was trying to stack up all the things they felt passionate about against the one thing they really didn’t - Hebrew school. I tried to imagine what might get kids like mine interested in Hebrew school, or at least curious about it. Well, if the rabbi was a Jedi master…

Once I had the Star Wars idea, I started poking around the internet and found that loads of people have made a link between Star Wars and Judaism, for example, the idea of Yoda being a Jewish sage.

I just sort of ran with it from there. At first it was to spark an interest, but it slowly evolved into something readers might find meaningful. 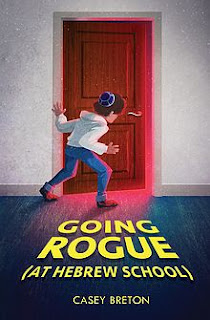 Q: What do you think the novel says about bullying?

A: I never thought of addressing the topic of bullying in my book, but in an early revision I realized I needed some kind of antagonist for Avery to learn from.

My grandmother and great aunt, who were twins, used to tell me, “There are no bad boys, only sad boys.” It was something their father taught them, and I took that wisdom to heart. I believe it’s true. When I developed Damon, I always kept that phrase in mind.

I don’t see Damon as a bully, but rather as a kid who has a lot of pain inside. Gideon was always able to recognize that, while Avery was consistently skeptical. I can understand Avery’s side too – when someone is behaving in such a cruel and hurtful way, it’s really hard to see anything but a bad person. It was important for me to include both of those perspectives.

Q: What do you hope kids take away from the book, especially about science and religion?

A: One thing I hope kids take away from the book is a sense that their questions about religion are valid and important. Judaism has always encouraged critical thinking, curiosity, and examination.

This aspect of our tradition is a beautiful entry point for the most skeptical among us. Yes, ask questions. Yes, have doubts. Yes, hold a light to the dark spaces. We don’t need to follow blindly, nor are we supposed to. Go ahead, wrestle.

Regarding science and religion – we live in an age of information. Whether we’re learning how to get through a pandemic, or grappling with the effects of climate change and working to mitigate the consequences, one thing is true: understanding science is vital to our survival. And yet we also need to nurture our faith and study our history.

I hope readers take away the idea that science and faith are not mutually exclusive. In fact, being Jewish and being science-minded go together quite nicely!

And if a reader takes away nothing else, I hope they have a fun time reading my book and find a few laughs along the way. One of my greatest rewards from writing this book came when I heard my 10-year-old son, who is a reluctant reader, laughing out loud as he read Going Rogue in bed.

A: I didn’t know how it would end before I started it. The first draft was much shorter and didn’t have the football thread. Definitely made lots of changes along the way, and wrote many, many drafts!

A: I have a completed draft of a young adult novel that I’ve been working on for years – it’s about a boy who stutters and fights to protect wild animals, inspired by a true story. It’s quite different from Going Rogue, and I love it dearly.  And I have started another middle grade novel about one of my personal passions…surfing! It’s an absolute joy to write.

A: Being Jewish, I wrote this book through a Jewish lens and focused on the experiences of a Jewish main character. However, I imagine children from different backgrounds will be able to relate to the tug between modern life and religious tradition.

A friend of mine who was raised Catholic said she would have appreciated reading this book when she was a kid. She remembers the frustration she felt as a child in religious school, always being told how and what to think, rather than being given the space to think for herself.

We cannot underestimate the strength of our children’s minds and the power of their questions. In the end of my book, Avery doesn’t have more answers. He doesn’t feel more resolved about going to Hebrew school. What changes is that he comes to understand that his questions have value.

I also had a very nice conversation with a mom and her two kids who all read the book together. They are not Jewish, but appreciated the book because it gave them a peek into a world different from their own. It was the first book they’d read with a Jewish main character.

While they thought the story was funny and relatable in many ways, they enjoyed learning about different aspects of being Jewish through Avery’s eyes. What’s nice is that different readers can access the book in different ways, and still find something in there for them.