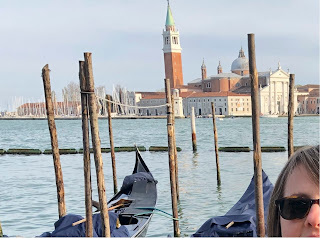 Shoshana Weiss is the author of the new children's picture book The Rabbi and the Painter, which takes place in 16th century Venice. She also has written Loosey Goosey: The Secret Life of Mother Goose. She is based in Pennsylvania.

Q: What inspired you to write The Rabbi and the Painter?

A: I was inspired to write this book after hearing the story from Alessandro “Sandro” Zanon, an expert at the Museo Embraico di Venezia, The Jewish Museum of Venice located in the city’s historic Ghetto.

Sandro told me the fascinating tale of the possible connection between Judah Aryeh, also known as Rabbi Leon of Modena, and the Christian painter Jacopo Robusti, also known as Tintoretto.

Could it be true? The reality is that Jews and Christians would likely not have had much interaction, but I was intrigued by the idea that these two unconventional men may have ignored society’s rules at that time and forged a friendship based on a shared outlook.

I was also really interested in exploring what the life of a Jew during the Renaissance would be like. When we read about Jewish history there is so much that focuses on the Holocaust. This is of course, a tragic and important moment for our people, but our history is so much more than that. 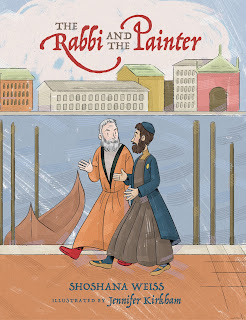 A: I spent hours and hours at the library and on the internet trying to substantiate this story with some kind of physical proof of their friendship—a letter or a diary reference. I contacted experts in Italy and England.

But I could never find anything to directly tie these two men together. I was so disappointed that I put the project on a shelf.

Then one day it occurred to me that I could rework the story so that it read more as fiction. I would leave it up to the reader to decide if they felt the story could be true.

I was very surprised to learn that Rabbi Leon of Modena actually wrote a book explaining Jewish rituals and customs to non-Jewish people that was translated into many languages.

Q: What do you think Jennifer Kirkham's illustrations add to the story?

A: I love Jennifer’s accessible style. I had originally wanted illustrations that would mimic Tintoretto’s dramatic brush stroke and color. But when I saw the sketch, I didn’t like it at all. It wasn’t very kid-friendly.

When I saw Jennifer’s sample, though, I fell in love. She was able to incorporate a brush stroke detail as a nod to Tintoretto, while at the same time keeping the look fun and young.

A: I hope kids see that throughout history Jews have often lived in places where they were the minority. They have been able to interact with these other cultures while maintaining their own.

In that same way, Jewish kids today may celebrate Hanukkah while their friends observe Christmas or Kwanzaa. They can learn about their friends’ holidays while at the same time appreciating their own.

A: I’m working on a project for kids that explores the Jewish concept of the yetzer hara and yetzer hatov--the idea of that there is a struggle inside us all to make good choices. It sounds serious, but the story is actually pretty funny.