Sharon Cameron is the author of the new young adult novel Bluebird. Her other books include the YA novel The Light in Hidden Places. She lives in Nashville.

Q: What inspired you to write Bluebird?

A: Bluebird was inspired by the strange juxtaposition of two very different pieces of forgotten American history.

The first was Project Bluebird, a top-secret, CIA operation of horrific medical experimentation with the aim of controlling the human mind.

These experiments were performed on unwitting, unconsenting American citizens using methods straight from records of the concentration camps, and like many other areas of science during the Cold War, I believe our government was paying Nazi war criminals to do them.

The second piece of history was Powell House, a religiously and racially diverse program run by Quaker volunteers from a mansion in New York City, created to extend education, practical help, and unconditional love to the refugees of war, a place incredibly ahead of its time in terms of social justice.

It was difficult for me to believe that either of these programs could have even existed in the same year, but they did, and researching them showed me just how nuanced the history of America really is.

Q: How did you conduct your research for this book, and did you learn anything that particularly surprised you?

A: Good research is always full of surprises!

When I gasp aloud in a quiet archives, when my fingers are itching for the keyboard before I can even leave the room, that’s when I know I’m on to something, and that was certainly true for the Powell House program. Their archives in Philadelphia were exhaustive in their detail, precious box after unopened box.

I was also able to stay with the daughter of the Powell House program director, and listen to the fascinating stories of a 99-year-old Quaker woman who had been a wartime volunteer. 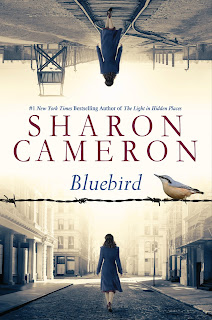 My information for Project Bluebird came from the CIA itself, a few, telling, undestroyed documents now available through the Freedom of Information Act, papers that read like a bad––and sadly real––science fiction film.

But some of the most meaningful research to me was listening to the oral history interviews of women who had been German teenagers during the war, raised under the regime of Hitler. These women not only suffered horribly after Germany’s defeat, they had to look the truth of what Germany had done in its face.

All of this research was not just surprising, it was shocking, in different ways and on many different levels, and it made me ask myself, and eventually my readers, one unanswerable question: What is justice?

Q: The Kirkus Review of the book says, "While the horrors of the Holocaust are certainly discussed, the brutal realities of postwar Germany and the gray areas between good and evil offer a lesser-seen view of World War II. Cameron slowly, delicately weaves these seemingly disparate stories into one seamless storyline." What do you think of that assessment?

A: I certainly hope that statement is true! Blending true history seamlessly into a fictional storyline is the first job of a historical novelist.

Creating a character that has never been born, and yet experiences a history that is all too real, allows that character to become an amalgam of that human experience, an experience the reader can then share.

I believe it’s one important way of honoring the real people who lived through those times, especially the ones whose names we’ll never know.

I also hope that readers realize the incredible potential we human beings have for change.

A: I’m working on a new novel about art forgers and baby smugglers in World War II Amsterdam. It’s fascinating, harrowing, and truly fun research. And yes, I do find myself gasping in the (virtual) archives!