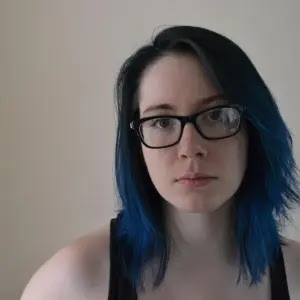 A.A. Balaskovits is the author of the new story collection Strange Folk You'll Never Meet. She also has written the story collection Magic for Unlucky Girls. She is co-editor in chief of Cartridge Lit, and she lives in Ohio.

A: That’s a really good question. Some of the stories were cut from my first collection (Magic for Unlucky Girls) so they’re fairly old, probably about eight or so years at this point. The most recent one, "Strange Folk,"was finalized a few months before the book was accepted.

A: I struggled with this, particularly in choosing the first story, which I think sets the tone for the collection. I started with a fairly strict (and somewhat gross) retelling of "Beauty and the Beast," where Beauty is starving and the beast is hoarding food and wealth.

Since the amount of "magic" in each story varies – some are realist tales, told slant – I wanted to begin in that vague, fairy tale land of "once upon a time" to set a moody tone before leaping into tales of strange happenings in the suburbs.

A: It was the original title of one of the stories, "Strange Folk," until I decided to shorten it, but I liked the "you’ll never meet" part of it and didn’t want to lose it. 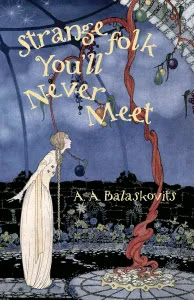 It’s a good summary of all the weirdos in the collection. They are strange, but since many of them are coming from fairy tales or history, ideally you probably won’t meet them. I think it’s for the best.

Q: What themes do you see running through the collection, and what do you hope readers take away from the book?

A: There’s a lot about consumption and the strangeness of relationships with others and with ourselves, but if I had to summarize, the book is about how the stories we tell ourselves, either from folklore or history or our own memory, still reverberate into our present. Girls keep on getting chewed up and discarded, the old losses still ache.

Once I’ve written a thing and it’s out in print, I have no control over it. Apart from the stories I am trying to tell, I hope that readers are entertained and connect to the writing.

What always surprises me is when readers find an emotional connection that I did not intend, but it means so much to them. I can’t seem to control that, but it’s always magical when it happens. I hope it fires their imagination.

I know the stories I am writing are weird and strange, but are they any stranger than our reality?

A: The pandemic has been a weird time for writing. I am working on a novel, which I decided to hand edit and rewrite at the beginning of this, but everything feels so fragile right now, even the smallest hint of danger or worry makes me wonder what the point of words are, and I stumble and halt. But I always return to them.

The story is about a sheltered girl tasked with saving the world, and having to simultaneously learn about the world she inhabits while deciding if it’s worth the effort.