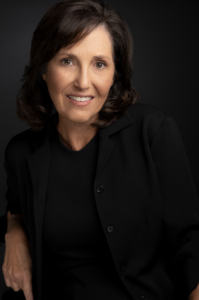 Anna Salton Eisen is the author of the new book Pillar of Salt: A Daughter’s Life in the Shadow of the Holocaust. She describes it as a second-generation sequel to The 23rd Psalm: A Holocaust Memoir, which she cowrote with her survivor father George Salton; that book will be rereleased in a 20th anniversary edition in August 2022. In addition, a documentary film, In My Father’s Words, based on the two books, is in production for fall 2022. She lives in Westlake, Texas.

Q: You write, “My journey began not with a prophetic vision or a compelling call from beyond or within...Instead, it began with a brief and ugly argument that I had with my father.” What impact did that argument have on you?

A: My father and I had a very close and loving relationship before and after the argument that forms the basis of the prologue of Pillar of Salt.

I had always respected the protective walls and boundaries he had established between his life before the Holocaust as Lucjan Salzman, and the new life he started when he came to America as George Salton, the sole survivor of his family, after surviving three years in 10 concentration camps in Poland, Germany, and France.

The argument ended when I handed my father the pen and legal pad I held, and he decided to share his story.

In that moment, I felt that I would finally begin to learn about who my father was, who my grandparents were, and the truth about the horrific years he had spent in the ghetto and camps.

This marked the beginning of my journey of discovery. I finally felt that I could be open with my questions, that my father would be my guide and teacher, and that his testimony would allow me to understand and reshape my identity as a child of Holocaust survivors.

After this brief exchange, I became emboldened and it led to two trips back with him to Poland, including returning to the town where he was from, the ghetto where he was separated from his parents when they were forced into boxcars and sent to the Belzec extermination camp to be gassed, and into his childhood home where the cherished memories had been silenced by his painful experiences as a prisoner.

Q: Having worked on your father's memoir with him, at what point did you decide to write this new book?

A: I felt so changed after the trip to Poland. After that trip, I helped my father coauthor his autobiography, The 23rd Psalm, which retells from a first-person perspective his experiences during the Holocaust as a young boy and teenager.

That book will be rereleased in August of 2022 in a 20th anniversary edition, with a new foreword by the eminent scholar Michael Berenbaum, added photos, documents from the Arolsen Archives, and some of my father’s Holocaust artwork which he is well known for and that is housed at Yad Vashem and the United States Holocaust Memorial Museum.

The stories of my father’s experiences and what he witnessed weighed heavily on my heart every day. I had also taken on the obligation to remember the stories of the others he had been with, his friends in the camps whom he had been liberated with, and those who had been murdered in the streets of the ghetto and during the long bitter years of Nazi enslavement. 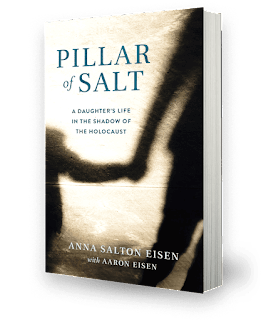 After that book and trip, I felt as though I had to give my own testimony, to speak the truth of the pain that I now carried. And I had met so many people who said they would never go to Poland or visit the camps. I wanted to share with them what I still consider to be the most meaningful trip of my life.

Q: How would you describe your relationship with your parents?

A: I honestly don’t have a bad word to say about them. They became parents even though they had not had what anyone would consider a normal childhood. They were giving, loving, loyal, and extremely ethical people.

Anyone who met my father found him to be caring and friendly, often remarking that he had a quiet dignity about him. My mother was lively and outgoing. She opened the first art gallery in Rome, New York, and later a ballet school in Maryland, before she became a well-known caterer. They were both artists.

I would say they loved life and loved each other fiercely, and I feel blessed that I was their daughter.

A: Since my father passed away in 2016, there were many years during which I had stepped away from Holocaust education and was unsure how I might still share his story and the lessons of this terrible time in human history.

I originally wrote a manuscript in 2013 and decided not to seek publication. When my son, Aaron, a gifted writer who had studied English at the University of Virginia, found it years later, he helped me to rewrite it, and convinced me to publish it.

He showed me that my father’s story and the Holocaust needed to be passed down to the third and future generations. Indeed, in our world today, we need to study the Holocaust and continue to learn how hatred, intolerance, and prejudice can destroy the most civilized nations.

A: Aaron and I are both involved in the production of a documentary film, called In My Father’s Words (you can watch the trailer here), based on Pillar of Salt and The 23rd Psalm.

The film is being directed by an amazing and creative filmmaker named Jacob Wise, who is the great-nephew of a Holocaust survivor, and who has brought on a creative team including a line producer, sound designer, illustrator, and musical artist Adalia Tara, who is creating an original score.

They’re passionately dedicated to making a film that will speak to the new generations in a way that is engaging and modern in the age of technology and new media.

A: There is still much to learn and discover! Last year, my mother, who is a Holocaust survivor, came to live with me. She turned 100 on January 22. When we brought her belongings to our home, we found among them a collection of small photos my father had kept from the displaced persons (DP) camps he was in after liberation, as well as his small diary and calendar.

Using these artifacts, I searched the Arolsen Archives, and through Ancestry.com and social media, was able to track down the families of seven other survivors who had been with him from the ghetto and through the 10 camps.

None of these adult children knew the details of their father’s own experiences, and we had a very emotional reunion, as they found their own fathers’ names and stories in my father’s memoir.

Since this story was reported by the Associated Press and shared globally, I have been contacted by many others whose fathers were in the same camps. The ability to share stories, to connect, and to form bonds of friendship, has been life-affirming and life-changing.

My father once said in a speech that the dream in the camps was that one day, good people, living in freedom and without fear, would come together in some unknown place that the prisoners could not even imagine, and tell the stories of the Holocaust, and care. That dream continues to happen.